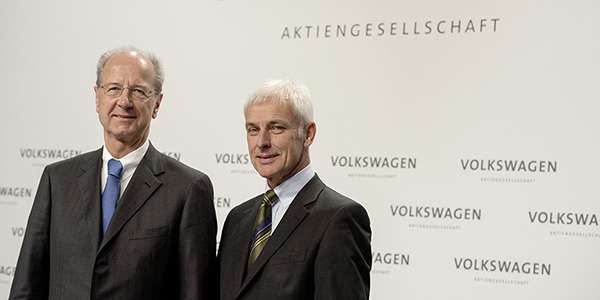 The news isn't getting better for Volkswagen in terms of the diesel emission scandal. In fact, CEO Matthias Mueller said it will keep the company busy 'for a long time.'
Advertisement

Speaking to workers at Volkswagen's headquarters yesterday, Mueller went on to say that the scandal would inflict "substantial and painful" financial damage on the carmaker. He did not elaborate on this comment.

What kind of "substantial and painful" financial damage are we talking about?

Reuters has learned about a possible lawsuit from a source. German insurance company Allianz is planning to sue Volkswagen due to the sharp drop in its shares due to the diesel scandal. Allianz holds a 0.06 percent share of preference shares and 10,000 ordinary shares. The combination of the two means Allianz lost about $9.5 million in its stake since Volkswagen announced the cheating.

Jobs at Volkswagen are also at risk. Bernd Osterloh, Volkswagen's works council chairman told workers there could be cuts due to how large the fines that will hit Volkswagen. Currently, Volkwagen employs 600,000 workers at 120-plus factories around the world.

"Should the future viability of Volkswagen be endangered by an unprecedented financial penalty, this will have dramatic social consequences," said Osterloh.

"We very much hope that the U.S. authorities also have an eye for this social and employment-political dimension."

Separately, Reuters reports that German prosecutors have widened their investigation into the emission scandal and is now looking into 11 more employees, bringing the total from six to 17.