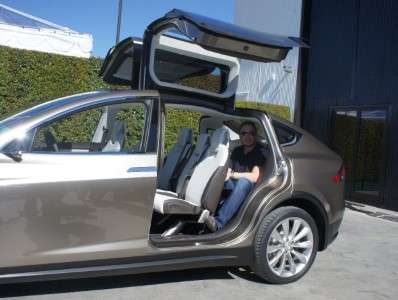 Since Elon Musk is looking to change the world, the success of Tesla Model X launch is extremely important. Since the crossover category has such major competitors in it such as the Porsche Cayenne and the Landrover SUVs, this launch will contribute significantly to the success or failure of this company. Here is how to watch the livestream of the Model X launch and where.
Advertisement

The first Tesla Model X “Signature Series” rolls off the assembly lines as Tesla has scheduled a launch event today on September 29 of 2015. The live stream begins at 8PM PT, and you can watch it here on the official Tesla website.

Since its inception, Tesla has excelled at bringing electric car technology into the gas dominated industry. It all started with the Tesla Roadster, a 2 seater sports car and launched the company and set the stage for today’s company flagship, the Tesla Model S. The model S has blazed new trails and every rating group has given it high marks. That means the only likely people that are interested in selling their Tesla model S is for other model S owners that want to upgrade to the P85 with the Ludacris button and the 0-60 drag time of 2.8 seconds.

The Model X is going to be a head turner for sure. With its Falcon Doors that open upright from the sides with hinges in the roof and all-wheel drive high stance, there was some concern initially that these doors might cause a problem in garages or if it ever gets turned over. However, Tesla states these issues have been solved.

With each new car introduction, Tesla has pushed towards the ultimate goal of bringing out the Model 3 which is a much anticipate mass market fully electric vehicle. Should Elon Musk’s goal of producing 500,000 Model X’s a year succeed, will lay the financial foundation for the long-awaited Model 3.

The overall market will be the judge of whether or not the Model X will deliver on its goal of ushering in of the people’s Electric car. Time will tell. Nissan’s chief Carlos Ghosn might have something to say about that and the technology is racing toward a longer range lower priced electric car for the masses.

Elon Musk also stated in a Danish interview that he expected autonomous cars within 3 years but expected governments to stand in the way for a few years before the mass adoption could take place. The implications of autonomous cars represent the biggest potential market disruption ever.

Here is what you get in Signature X.

What are your expectations from this car?

Aaron Turpen wrote on September 29, 2015 - 2:24am Permalink
What most of the Teslarati fail to understand is that Tesla's cars are nothing more than marketing hype. They exist to get the company in the paper, on blogs, etc. Nothing more. They're not and never will be an actual money-making venture. Tesla's ultimate plan is not to become an automaker. It's to become an energy mogul.
ricegf wrote on September 29, 2015 - 6:40am Permalink
I believe Tesla's goal is to be producing 500,000 Model 3 vehicles per year by 2020, not Model X vehicles next year. The Model 3 is the critical mass market car, while the Model X is a less critical expansion of their luxury model targeted to the female demographic. Reaching the target production rate for the Model 3 depends on successful launch of the battery "gigafactory", scheduled for next year.