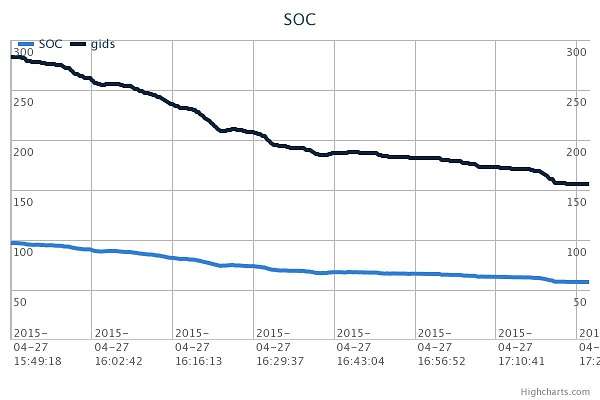 If you are like me, you want to make sure you get the most out of your Nissan Leaf’s battery. This article will give you an overview of my battery philosophy which under full disclosure is my very own attitude toward the battery and is not backed up by data hungry research however, that being said, I do have 41,000 miles on my Leafs pack and do take very good care of it.
Advertisement

Side note, here, regarding my resent articles about the $5000 and $7000 residual Nissan Lease Credits, I would like to note that the sold listings on Ebay at the time of this writing were mixed on resale of the 2013 Leaf which I used as my first pass check. The lowest prices I saw in the sold listings was in the $10k range but these were all cars which had been repurchased from the original buyers because of electronic issues ranging from battery malfunction to controller malfunctions. If the only thing was a battery swap from the factory, then I would feel pretty good about getting one of these since an EV really is only four main components, the controller (Inverter), the Charger, the Battery, and the Motor.

Now, back to the battery, if you don’t have the Leaf Spy app, you are less knowledgeable than you could be. I believe there are other apps now besides this one, but this is the one I use. The companion app to this is the Leaf Logger. The Leaf Spy Lite is free, and the Leaf Spy Pro and Leaf Logger charges a nominal fee and in my opinion you should go for it. Other issue is this app only runs on the android operating system. You will also need an OBDII blue tooth reader which aren’t very expensive either. If you already have a droid phone you are all in for around $30 if I remember correctly.

Now, here is how I maximize my pack. I monitor my GIDS via the Leaf Spy app. I take note of the charged GIDS in the morning after a night charge. I also occasionally give the pack a CHAdeMo fast charge every so often. I have noted that a CHAdeMo fast charge can bring up the GIDS higher than previous 240v 30amp charges have. I also believe in “battery exercise”. While I haven’t read much about batteries having any memory effect and don’t believe that these Leaf Cells do, however, I have noted my GOM goes up after I have gone on a longer trip with the battery that involves more regen. I also keep the driving in ECO drive mode often to maximize the regen. I still average out at about 268 GIDS after an overnight 240v 30amp charge. GOM ranges at full charge each morning 85-93 depending on early morning temperature and the previous trip.

Since my daily commute is now only 17 miles each way, start out in the morning downhill and then I plug in at 120v at the office and then turn around and head back up the hills to go home this has worked out very well. I’m in sales so some days I’m putting many more miles on the car than that but some days I’m office bound and that’s the routine. The Leaf Spy app gives you graphs of every battery cell pair and you can easily see if any of the cells are wildly out of balance. None of mine have one way out of whack but I keep monitoring them anyway, Just in case.

If you are slightly battery obsessive, you will be amazed at all the information this tool can give you. If you want to keep a look at the battery temperature in southern climate’s to your tires air pressure, this tool gives it to you. It is data paradise.

You can view my two video’s on this below.

Jim Pollock wrote on June 16, 2015 - 2:46pm Permalink
Leaf Spy Pro is now available for iOS devices.
Sput wrote on June 22, 2015 - 2:10pm Permalink
What is a GOM and what are GIDS? I feel like I'm drowning in a sea of acronyms lately. Can you explain what they are in simple English?
Jim Pollock wrote on June 22, 2015 - 5:12pm Permalink
GOM=Guess-O-Meter, This is what people call the real time range estimate displayed on the instrument cluster of the Nissan Leaf. GIDS is the units of energy currently in the battery. It can be read from the diagnostic port on the Leaf. This is the OBDII connector the Nissan service tool plugs into and LeafSpy uses to collect information. It is names after Gary Giddings who first discovered how to read this unit of energy so it got named 'Gids". The unit is actually 80 Wh. So if the Leaf battery could be charged to 100% (it can not, to extend life) it would read 300 Gids or 300 x 80Wh = 24kWh.
Marvin Mulkey wrote on June 23, 2017 - 2:56am Permalink
I have a LEAF with 100,000 miles... it's a 2012SL. Two years ago I started driving for Uber, I put 50,000 miles on the car last year. I charge this car 7 times a night, 50 times a week, Chademo plug to 100%. The car was marketed as an 80 mile range car, now it charges to 75 miles, so I lost one mile of range per year. I have zero 'battery life fear' I intend to burn the car up by using it as frequently as I please because I feel the engineers at Nissan knew they cannot put a car out there that dies in five years or eight years because you'll never sell another one after the first one dies too soon. I still see dozens of turn of the century Priuses, still on the road they came out in 1997. Case in point the Hummer! Crap truck, only produced for 8 years you don't even see them on the road anymore. I'll drive this LEAF 300,000 miles and I'll never replace the battery..... Wanna bet me?
Red Oscar wrote on June 9, 2018 - 8:05am Permalink
If only I could get to a Chademo charger. I leased a 2016 Leaf in December 2016 with the 30kWh battery. Had to have it shipped to Kentucky because the Indiana dealer was way too far from home to drive it. On December 7, 2017 at 7003 miles, it lost the first battery bar. Then last month (May 2018) the Leaf loses its second battery bar. So I bought Leaf Spy Pro this week to see what is going on. A full charge to 100% on my 240V charger now gets me 268 GIDs. So effectively, at a little over 11,000 miles, my 30kWh battery has become a 24kWh battery. There seems to be some truth about accelerated degradation of the 30kWh battery. I'm about half way through my lease and curious to see if I'll lose enough capacity to get a new battery. Here in Kentucky, we have exactly 2 Chademo chargers, both near Cincinnati and both more than 130 miles away from home. Leaf Spy Pro says my car has been QC one time in 11,500 miles. So here in Kentucky, quick charging really isn't an option and you would grow old charging on L2 while trying to get to 300,000 miles.....LOL.
Aidan Stenton wrote on January 14, 2019 - 4:50am Permalink
Very interesting. That is fantastic performance and not something I've seen often on a LEAF. I'd very much like to be able to emulate your results. So how is your LEAF coming along now? 1.5 years later. I own two secondhand Japanese Domestic Market 2013 LEAF's so would like to collate a little bit of heads-up data.
Danny Armnno wrote on November 10, 2015 - 1:23pm Permalink
Can you use LeafSpy with2015 Nissan Leaf S model?? Thank you!
Jim Pollock wrote on November 10, 2015 - 9:12pm Permalink
Yes, you can use LeafSpy with any model Leaf. Just tested it today on a 2016 Leaf with the new larger 30 kWh battery.
Joshua D Hinson wrote on November 20, 2015 - 11:09am Permalink
What OBDII connector do you recommend for a 2013 Leaf S? I'll be running LeafSpy on an iOS device.
del wrote on April 26, 2016 - 9:30pm Permalink
Same as Joshua Hinson said, what OBDII bluetooth connector of the iOS. Just wasted $19.99 and realized the Konnwei KW902 I have does not work for my iPhone 6s. Guess I can pull out an old android I have and REBUY the leafspy pro?
Jim Pollock wrote on April 26, 2016 - 11:03pm Permalink
The adapter listed on the App Store (iOS) for LeafSpy Pro is the "LELink" which is a Bluetooth 4.0 LE OBDII adapter. The LELink is available from Amazon.
Terry Thompson wrote on August 27, 2020 - 11:47pm Permalink
Here we are over 4 yeas later and I'm a first time owner of a 2016 Leaf SV. I'd like to jump in to this OBD2 technology but wondering what is now the state of the art for the plug in device and using with a iPhone SE. Any info appreciated.
Jim Pollock wrote on August 28, 2020 - 2:02pm Permalink
LeafSpy Pro is available on the App Store for iOS. Recommend OBDII adapter is the Carista which works with both iOS and Android versions of the app.
Keith Bierman wrote on September 12, 2022 - 1:41pm Permalink
@jimpollock Looking at a used Leaf, there are 10/12 bars which isn't bad ... but using LeafSpy SOH is 74%, and cells 1, 3, 5, 20, 24, 25, 27, 33,36, 39, 41, 43, 79, 81 and at least one more show up as "weak cells" during our short test drive. The pack wasn't fully charged before our test ride (LS says 94.6% SoC). Just how bad is this? Anyone have any luck with taking a used leaf with such a pack to a dealer for a factory replacement or does the warranty only start kicking in at 8/12 bars or some such?