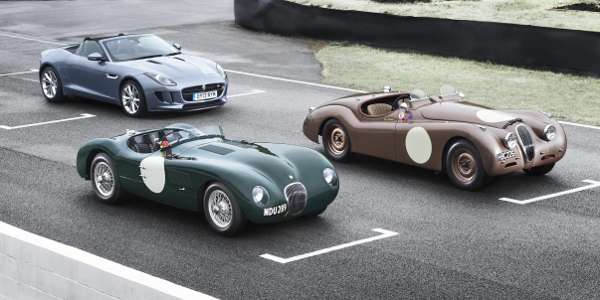 The legendary race cars from Jaguar may have paved the way for the more modern street cars today like the F-Type, but they have never forgotten their storied history birthed on-track.
Advertisement

Jaguar built the C-Type sports car in the 1950’s to do one thing and one thing only...racing. The C-Type was engineered for cornering and fast acceleration and after seeing how well the XJ-120 did on the track, the XJ’s were tweaked into a XJ-120C or C-Type and it was born to race. If the C-Type lacked anything it may have been the creature comforts, the frame was ridged and the interior was a bit sparse. Jaguar was ready to prove themselves on the race circuits and they knew this car was capable of doing just that, and it did! Shortly after completion, one of the three C-Types entered in the most important sports car race in the world and won the 1951 race at Le Mans.

Over time the C-Type was upgraded and refined, but it finally came time to replace it with the D-Type in 1954 and it came out of the shadows of the C-Type and became an instant winner. The Jaguar D-Type won the famed Le Mans in 1955, 1956, and 1957. Its sleek and aerodynamic body was like something from the Space Race. The innovative design and industry changing technology behind the D-Type would forever change the way race cars were built. Jaguar then decided to stop its factory racing team and offered the remaining D-Types for sale as XKSS versions. If you are a Jaguar fan you know how that story ended; the XKSS’s became some of the most highly coveted sports car in the world:

As the XK-150 began to show its age, the executives were given the task of building a replacement that would carry on the heritage of Jaguar’s racing success in the spirit of the D-Type. The product of all their hard work was the iconic E-Type and it would go on to be the most celebrated and highly recognized sports car ever. A stunning car from top to bottom, the E-Type was about to take the sports car world by storm. After a couple of prototypes, the E-Type was unveiled in 1961 at the Geneva Auto Show. Some believe that the 1961 Jaguar E-Type may be the benchmark for all sports cars.

In 1975 after the E-Type stopped production, the world was left waiting to see how Jaguar could ever replace such a jaw-dropping and sophisticated sports car. When the Jaguar F-Type was unleashed in 2013 it was a perfect blend of all of the iconic cars of their past. It has the raw power of the D-Type, the winning style of the C-Type, and elegant design of the E-Type; however it captures all of this while it harnesses the modern technology to carry it into the future.

So after a few years of some rocky sales and lack of performance, the new F-Type has helped Jaguar get their groove back.

I’d say the sky is the limit of where they may go next. I know one thing for sure; Jaguar will always push the other sports car brands to follow their lead as they have done for years…on and off the track.

Toyota's First EV Will Have a Name of BZ: Toyota BZ
First Videos From Inside The Boring Company's Las Vegas Loop
END_OF_DOCUMENT_TOKEN_TO_BE_REPLACED