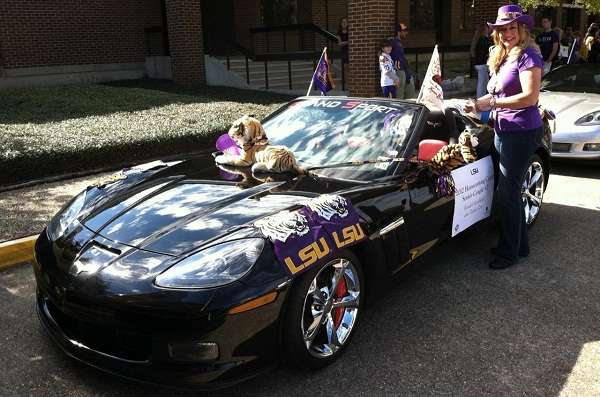 Karen Bedell might be a grandmother, but that has not stopped her from realizing her Corvette dream and helping others to realize their own passion for those four round taillights of excellence.
Advertisement

Karen Bedell was born and raised in Baton Rouge, along with her older brother, Keith Jarvis. Being only one year younger than her brother, Karen was very close to Keith growing up, and developed a love for the things that he loved. Those things included dirt bikes and muscle cars. It is to Keith that Karen attributes her appreciation of fast cars, which grew into the passionate love for Corvettes that she has today.

Karen says that she has had an appreciation for “the four round taillights that hold a reputation of pure performance” since childhood. But, it was not until 2009 that she stopped to take a look at what was to become her first Corvette, a pre-owned Navy Metallic coupe. Impressed with the handling of the car on her first test drive, she was finally able to convince her husband of 38 years, David, to let her take HIM on a test drive as well. But, she did not exactly win him over with her expertise behind the wheel:

"I guess my driving skills did not impress him. He got motion sickness, told me to hurry up and let him out and he left that place in a hurry. I told them, 'I'll take it.' To this day, he has never driven my Corvettes but does a great job of hanging on for dear life and supports my owning and driving a Corvette."

A Woman 'All About Corvette'

It is a good thing that David supports his wife in the Corvette arena, because, as Karen describes herself, she is a woman, “all about Corvette.” Currently she is driving a 2011 Chevrolet Corvette Grand Sport convertible, which she purchased showroom new in August 2011. After putting four sets of tires on the car over a period of two years, it is easy to imagine why Karen says the Grand Sport is built for the way she drives—another Danica, some say! 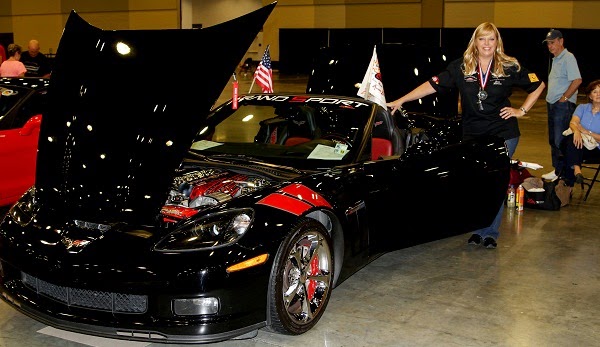 Today Karen and David live in Denham Springs, LA. Their children are all grown, with kids of their own. But, Karen is not just your everyday grandmother of three, although her 16-year-old grandson loves to brag that his grandmother drives a Corvette convertible. “It’s our turn again,” Karen says of her and David’s life today, “and this two-seater fits our need to just get up and go.”

Karen says the dealership found her the exact car she was looking to drive, with the black, red and chrome giving her the sporty, classy look she was seeking. She loves cleaning it, which she compares to petting a sleeping panther—and, boy does she clean it! Although some people will assume that the car stays garage-bound most of the time, she actually drives AND cleans it daily, including the engine, and has done so for over 60,000 miles thus far. Because it is her regular vehicle, Karen prefers having this contemporary racer over a classic. The frequent use and many out-of-town trips she makes to car shows just would not be practical for most classic Corvettes, she explains. 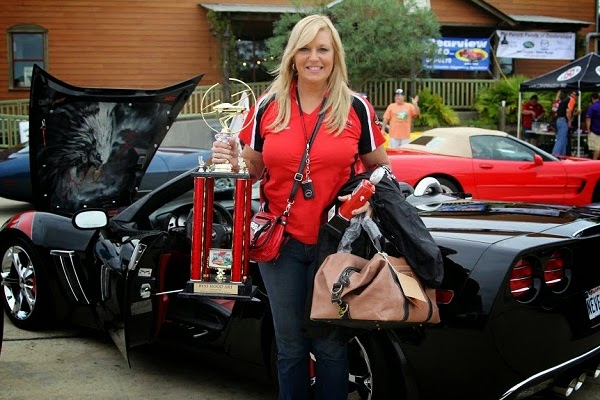 A Blank Canvas for Fine Art

Although she does allow David to help her shine the chrome on the wheels of her beloved car, Karen makes it clear that she and she alone cleans and works on the car. Not only did she design the car and engine to match its reputation, Karen is also a seamstress. This skill allowed her to design and create her own leather console cover and seatbelt covers, which match the stripes on the outside of the car.

Karen has a career in cardiology, but her hobby is fine art. Thus, the blank hood liner was an obvious canvas for her work! Both of the liners in her Corvettes were hand-painted, not airbrushed, by Karen herself. She then painted the hood liners of several other Corvette owners in her local club. Typically, she says, women and children in particular appreciate the beauty of the art, because they usually know little to nothing about the engine. For night cruises, she lights up the hood liner with colored strobes and red LED lights breathing in the side gills (seen in the included video), much to the excitement of fans of the events.

Inspiring Her Corvette Passion in Others

Not only does Karen support her own passion for Corvettes, she helps inspire that passion in other owners, encouraging members of her local Baton Rouge Corvette Club to design their American dream car to express who they are. She is the webmaster of the Baton Rouge Corvette Club; maintains the club’s Facebook page; and Karen is the chief photographer for the club, as well.

Being a female has made becoming a force in this select community a challenge, but Karen has succeeded. “Since I am a woman, it has taken much more effort and energy to prove my abilities, talents and knowledge of this great car but I have been accepted with open arms into the world of performance cars.” And, Karen certainly has a list of achievements anyone in her position should be proud of calling their own!

Karen has raced autocross with brother Keith; trained one-on-one at No Problem Raceway; and taken on the toughest roads guaranteed to thrill any sports car driver, including the Tail of the Dragon in Tennessee; 3 Twisted Sisters in Texas; and the Tail of the Pig in Arkansas, all at extreme speeds! In fact, she won a piggy bank trophy for taking the Tail of the Pig the fastest (and she found out why it was a piggy bank, after she realized she burned $1000 worth of rubber on the run). Upcoming events for Karen include Arkansas again next month and Talladega in Birmingham this August. For driving at high speeds, Karen explains why she prefers the Corvette to any other car out there: 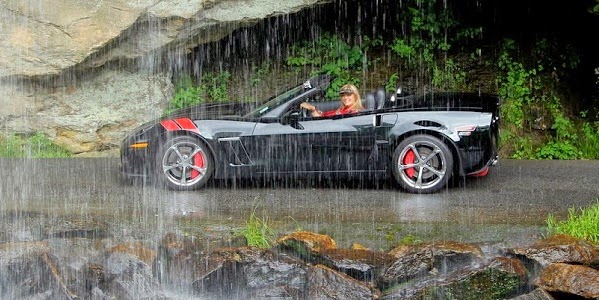 I have always driven with two feet, a huge advantage racing and stopping on a dime. My Vette is an automatic with the option of using paddle shift which allows me to drive with all fours, quite a thrill and an advantage at high speeds. Corvette is the only American-made sports car that has its own independent plant and its own engineers concentrating on this one car. I consider this car to be safer than any I have driven because I can quickly move ahead of traffic and they definitely keep their eyes on this car.

Because her car gets decent gas mileage and all she currently needs in speed, she does not plan any other adds to the engine beyond the performance exhaust and cold air intake. The car has a single button on the console that will turn the performance exhaust on and off—loud and mean, she says, to impress any car enthusiast out there, or silent when you just want to cruise and enjoy some music on the open highway.

Having owned both a coupe and a convertible, Karen says she prefers the convertible. “Being able to power my top up and down in 20 seconds at a traffic light is fabulous. I do not see any difference in the noise level and the car has plenty trunk room and no worry about what might fly out of the car when the top is off.”

Karen stays busy with car shows, as well, typically entering at least one a weekend to help support charities. Additionally, she simply loves spending time and socializing with others who share her passion for the Vette. She has participated in over 50 Homecoming, Mardi Gras and patriotic parades, as well as the Corpus Christi Vettes & Jets on the Lexington event. And, Karen’s passion for her favorite car just gets stronger, it seems, even after 17 “best-in-class” trophies and 18 winning plaques in area car shows. She continues to try and pass her love for the Corvette on to other owners and potential owners. And, as a member of the Baton Rouge Corvette Club, Corvette Museum, Simply Corvettes, and Corvette Nation, Karen is attempting to spread the knowledge she has gained through her experience along the way. 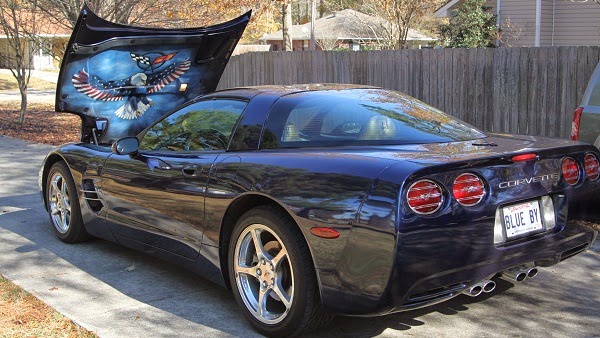 With active clubs all over the world, forums sharing valuable information and websites supporting aftermarket merchandise, designing the Corvette of one’s dreams can become a reality, Karen says. “Choose yours, design it how you want it to look and perform, then share the experience with others.”

Would you like TorqueNews to consider your vehicle for our Readers’ Rides? We would love to hear from you! Use the contact link at the bottom of the page to tell us a little about your ride and why it would be a great choice to share with other car lovers out there.

shirl wrote on April 14, 2014 - 11:30am Permalink
oh, wow, I loved this story about this amazing woman!...so many talents! courage! and all that she does w/that car! and it is beautiful. absolutely great story. and one other thing....IT IS MADE IN AMERICA!
Donna Naylor wrote on November 25, 2014 - 10:35pm Permalink
She is what a true corvette woman is about. Just like me, Corvettes are my life. I wanted a Corvette at 8. I got my first Vette 10 years ago. I have 3 now. They are daily drivers. Waiting to bring home my first one from Bowling Green within a year.