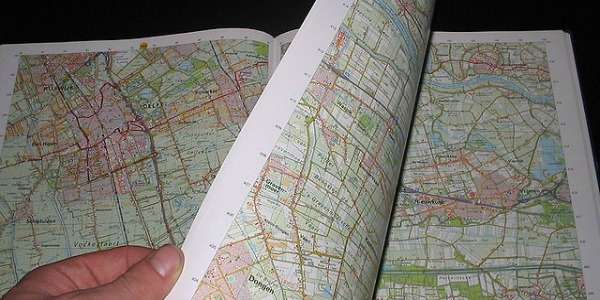 These 5 GPS Features Have Made Printed Maps Obsolete

It may shock some of the more tech savvy among us, but there are still a lot of drivers who use printed maps to guide their trips. Here are five reasons to give GPS a try--but not necessarily give up that hard copy just yet.
Advertisement

Technology—specifically, the accumulation of it—just isn’t my thing.

Don’t misunderstand: I am not anti-technology. After all, it is the development of technology that has allowed me to have the career I have as an on-line writer. However, I am not one of those people who just has to have the latest thing the moment it comes out on the market. In fact, by the time I get whatever the “latest” thing is, I’ve probably missed half a dozen or better other “latest things,” waiting until I am forced to move forward into a new routine.

Today, I got the push I needed to go forward with a GPS instead of printing out a Google Map. I’ve been told time and time again, by everyone from friends to my mother, that a GPS is a way to go, especially for a location-challenged person such as myself. But, I’ve always had great success, just printing out the Google Maps for my trips and going forward with those. I’ve always gotten where I was going, always gotten back home. But, when my boyfriend insisted today that I use his GPS system for a day trip I was taking, I reluctantly agreed, deciding that I needed to at least give it a try. “You’ll never go back,” he said after showing me just enough to get me where I was going and back home again. I still printed out my maps and took them along for the ride, deciding that (1) I would be more comfortable with a backup and (2) it would be good for comparison, to see if one was more accurate than the other.

Well, after a busy day and a great opportunity for comparison, I am ready to report my findings, specifically the benefits of using GPS over a printed map:

1. You get directions to your location without looking away from the road.

Distracted driving is a huge problem nowadays. Yes, the GPS does have all of the expected visuals, and if you want to stop and study it, you can. But, since it feeds you the directions verbally, there is never any reason to look away from the road. And, I found that the prompts for upcoming turns were more than adequate, in both number and pre-turn alert time, so as to be helpful and not hazardous.

When I arrived in my targeted town, I saw several places that got my attention as I passed by, heading for my destination. Again, I am location-challenged, and being able to just navigate back a la freelance really was not something I wanted to try. But, a bit of playing with the GPS options revealed that if I wanted to locate businesses in the area and go there after my meeting instead of trekking straight home, it would be no problem, as I could pull the directions right up on the screen - a little hard to do that with my printouts.

3. GPS works with the driver.

While the printouts are set in stone, the genie in the GPS knows if I go the wrong way or pass a turn and “recalculates” for my mistake. After passing one suggested turn, I was given another option just down the way; passing another, I was instructed to make a U-turn in a safe place to get right back on track. If I had been using my printouts and had made these wrong turns, I would have been stopping, studying, figuring out how to get back where I needed to be, and I may not have even realized I'd made a mistake until I was good and lost - an unnecessary concern using the GPS, which makes the journey much less stressful.

4. GPS can get the driver home from anywhere.

When using Google Maps, it has always been necessary for me to print multiple maps—one to my destination and one back home. Sometimes, because of one way streets and other such difficulties, simply going “backward” isn’t an option—the return trip can be a lot more difficult than it seems! But, with the GPS, just hit “Home,” and you’re on your way!

5. Missing street signs are not a problem.

When using a printed map, you are looking for road signs. But, if you’ve ever driven anywhere, you know that road signs are not always placed in prominent view, and can sometimes be missing completely. But, since the GPS is telling you to turn as you approach, actually seeing a sign is less of a necessity. And, if for some reason you turn at one road when the GPS meant for you to turn at the next one? Recalculating!

Don’t get me wrong: I still believe printed maps have a place. In the future, while I may use a GPS for the “main” support on my drive, I will continue to have hard copy maps for a backup. What if something happens to the GPS? What if the satellite signal is lost? Relying 100% on technology is rarely the best option if you have manual alternatives, in my opinion. But, when the technology exists that truly can make one’s life a little easier—and safer, in the case of distracted driving—then upgrading to the higher-tech option may be the better choice, and in this case, that means GPS.

John Goreham wrote on March 28, 2014 - 10:13am Permalink
Awesome story and related to me directly. My son plays travel hockey and we drive all over the region to rinks to play new teams all the time.. Hockey rinks are unusual. They are often on small new roads called "The honorable Sargent Pirelli Parkway" or something like that. Named after a local veteran or town leader. Actually renamed in many cases. The GPS does not know about the new name. So I have the habit of Google mapping and printing the directions before I go to a new rink. Has saved us many times.
Mechele Dillard wrote on March 28, 2014 - 10:24am Permalink
Yes, that is a perfect example of why I will never give up my printed maps completely! :D
shirl wrote on March 28, 2014 - 10:22am Permalink
I so totally agree w/you! use the gps as primary, maps as backup. also, pulling up the maps on google is great to ''see'' areas you are going to. and the maps have all the other places you can ''see'' the trip you are planning and all the other places around it that you may want to go to(and can pull up on gps:) when you are actually on your way! :) personally, I would not start out on a trip w/o my ''maps'' . I keep an atlas in the car! :) and get new one every year. BUT, this is for backup when the gps is not picking up....and in the mountains, well, it can be there one minute and gone the next. great article. I enjoyed it :)
Mechele Dillard wrote on March 28, 2014 - 10:26am Permalink
Thanks, Shirl! Yes, you know, I did not mention this, but when I started my trip yesterday, the first few miles, there was no satellite service ... I was wary of trying it, anyway, but then I was like, "Okay, this is not starting out well." LOL--but, as you read, it picked up later. :)