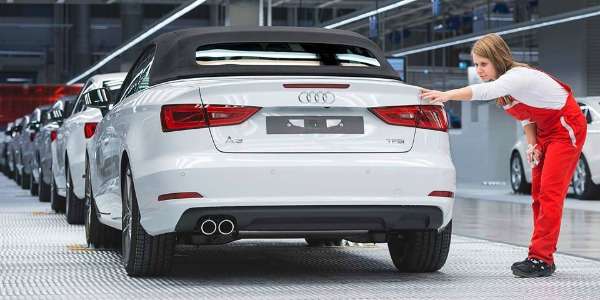 Audi Delivering 17 New Models into the Market in 2014

In response to increased profitability, Audi is working harder, planning to deliver 17 models and derivatives this year.
Advertisement

With a successful first quarter of 2014 motivating the company, Audi has plans to move forward with new models and more employees as the year goes forward. From January through March, 412,846 deliveries of the Audi brand were made, up 11.7%. And, even tho’ there was high up-front spending, an operating profit was achieved.

“Despite high up-front spending on new products and technologies and the expansion of our international production network, we have generated an operating profit of € 1,314 million in the first quarter,” declared Axel Strotbek, Member of the Board of Management of AUDI AG for Finance and Organization. He explained that the operating return on sales of 10.1 (2013: 11.1) percent is again just above the strategic target corridor of 8-10 percent, supplying further evidence of the company’s high profitability.

In response to this high profitability, Audi intends to go forward, not rest on its laurels. The company plans to not only take on about 2,000 experts this year in Germany alone, but to also offer apprenticeships to approximately 750 young people. The new employees will be recruited mainly for the lightweight construction, connectivity and electric mobility fields of expertise, or be involved in the expansion of the international production network.

Audi is moreover planning for growth in 2014 as a whole. The brand with the four rings will be introducing 17 new models and derivative versions into the market this year: The S3 Sedan and the A3 Cabriolet are already in the showrooms. The new Audi A3 Sportback g-tron and the fuel Audi e-gas mean customers can already drive in a largely CO2-neutral way. At the Geneva Motor Show in early March, the company also gave the S1 and S1 Sportback models their first public showing. In addition, the third generation of the sporty design icon Audi TT enjoyed its world premiere at Geneva. The Audi TT will provide an extra boost to growth in the current fiscal year.

The Audi group does expect to see a slight increase in revenue for its efforts in 2014, expecting more than € 50 billion. The systematic expansion of international manufacturing structures, rising up-front spending on new products and technologies as well as mix effects will initially diminish profit in the current fiscal year. At the same time, the positive trend in deliveries and revenue along with ongoing productivity and process improvements will impact operating profit positively. Overall, the company expects the operating return on sales to lie within its strategic target corridor of 8-10 percent.

shirl wrote on May 6, 2014 - 6:51pm Permalink
this company is so solid. I just hope they will continue w/ QUALITY, not just a lot of diff. cars :)
Parks McCants wrote on May 6, 2014 - 10:25pm Permalink
That's nice... What cars will we see in North America? Will any of them be affordable? Thanks. I remember the days when Audi was crap. The average life expectancy of an engine was 60,000 miles. Good to see some real changes in the mark.