Scion Pickup Still a Possibility - How it Happens

For the past several years, a Scion pickup has been all over the rumor mill. At times, it seemed eminent. At other times, it was reportedly dead. Is it still a possibility? Sure. Is it still a long shot? You bet. If it were to happen, this is how it would go.
Advertisement

At the New York International Auto Show, I had the opportunity to speak with Scion Vice President Doug Murtha. He told me the problem is two-fold: Chicken Tax and Scale.

Since the 1960s, the U.S. has had a 25 percent tariff on light truck imports. This "Chicken Tax" has helped insulate the U.S. automobile industry from foreign competition and has kept foreign pickups out of the U.S.. In fact, it was the big reason for the downfall of the VW bus craze during that time period. The tariff was actually lumped into a larger policy in response to U.S. chicken exports to Europe. This is where it gets its name. Over the years, all the other tariffs have been dropped except for light trucks.

With regards to Scion, if the Chicken Tax was dropped, they could look at ways to build the truck and import it into the U.S. You may be wondering why they don’t just build it in the U.S. This is the second point – scale.

In order to make building a Scion pickup, they would need to produce and sell around 100,000 units. Currently, Toyota has only the San Antonio, Texas plant to build trucks. And this plant is at or beyond capacity (depends who you ask). This capacity constraint is due to the fact that both the Tacoma and Tundra are built in San Antonio, and both trucks are selling very well. 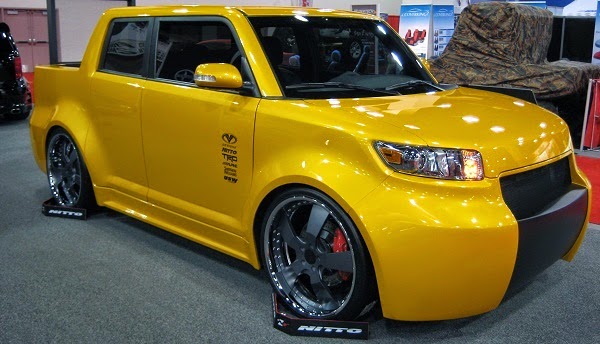 If Scion can’t build their pickup there, they could try one of the other car factories in the U.S. Yet, building a car and a truck are vastly different things.

These issues keep the business case for a Scion truck as not feasible. However, what would a Scion truck look like? It would be a small, compact truck ideal for large cities.

A Scion pickup would most likely look like any of the concepts brought to the SEMA shows over the years. These trucks have the Scion styling focus of unique lines and trendy, youthful colors. It also would be built on a uni-body platform with a fuel efficient engine and low payload/towing capacity. In many ways, it would be a smaller, more stylish Honda Ridgeline. 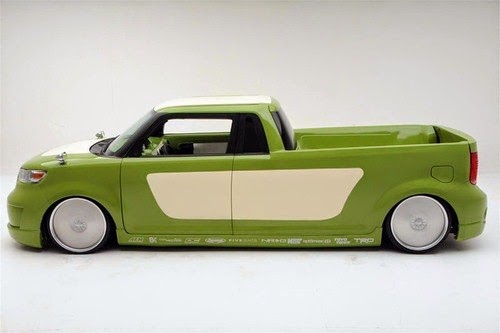 The appeal is pretty obvious to those living in large cities. Driving and parking a full-size truck in a major city is a pain to put it lightly. However, the need for a pickup is still prevalent. People want to haul things like garden supplies, bicycles and groceries without worrying about messing up their SUV. A compact truck fits the bill for them.

This truck would be easy to drive/park, load supplies in (with a low bed) and fuel efficient. These features add up to a perfect combination for a compact truck.

In terms of users, gardeners, delivery folks, and casual truck users would likely enjoy owning small, easy to use pickup. Not to mention, after-market customization enthusiasts would have a field day with a stylish and affordable little pickup. Considering that Scion is Toyota's "youth" brand, and that a cheap small truck would be pretty popular with younger buyers, all the pieces would seem to fit together...if it weren't for that darn chicken tax, that is.

Dropping a 50+ year old tariff to make way for a Scion truck might seem far-fetched, yet it may be a reality sooner than you think. Currently, the U.S. and 11 other nations including Japan are negotiating a new Trans-Pacific Partnership. This partnership may include dropping the Chicken Tax altogether. Negotiators have said they hope to have something wrapped up by year’s end.
With trade negotiations ongoing, a Scion pickup could be right around the corner. And yet, it is politics. It may never happen.

Tabatha Livingston wrote on April 26, 2014 - 8:07pm Permalink
Love this truck
Francine wrote on November 8, 2014 - 8:39pm Permalink
This is the kind of truck I want!!!!! Those big trucks other companies make does not fit my lifestyle and their gas mileage sucks!!!!!!!!!! Oh please Toyota make these trucks for sale!!!!!
Francine wrote on November 8, 2014 - 8:54pm Permalink
I would buy one of these trucks in a minute!!!!!!!! Fits my lifestyle to a T.
Cap'n Jay wrote on January 9, 2015 - 7:04pm Permalink
Just build something like the old 5-lug Tacoma. You know, an ACTUAL compact pickup, not like the current Tacoma, which is almost as big as the first-gen Tundra...
Wix wrote on July 11, 2015 - 4:26am Permalink
I would love this truck as long as the price tag is not much and automatic, don't really care much for AC. what they should do is make an option with a small-like campershell, one that doesn't go so far up so it looks like an suv but one that just peeks over a bit so if you wanted to "escape the city" because where I live I love the city, but I also love going on long road trips and saving money by staying in my pickup, just a suggestion eith way I love this concept I hope we can get something with a 4 cylnder engine that is reliable and a bed in the back, that alone is good enough because it's only a matter of time where parts get harder and harder to find for our toyota/nissan/ranger pick ups.
Minh wrote on May 4, 2016 - 5:12pm Permalink
Parking a big pickup is real pain in the ass. We need a mini truck which can carry a 4x8 plywood for weekend projects. We really also need a low gas mileage mini truck to drive every day. I would like to see mini pickup on the street again. It makes sense.