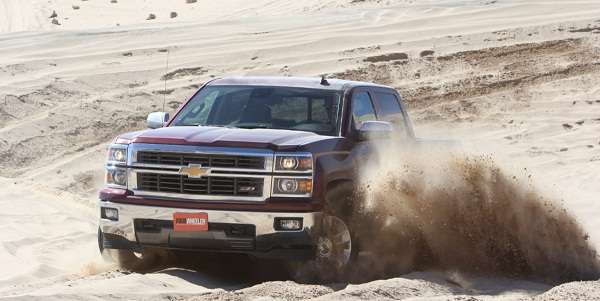 General Motors released its first quarter earnings report showing it narrowly avoided a much anticipated loss. Instead, GM turned a $125 million profit – down 86 percent versus last year. It looks like GM was able to avoid a recall induced loss thanks to its pricing strategy on full-size trucks.
Advertisement

For the record, the first quarter of 2014 was GM’s worst showing since the sixth-month period after it emerged from bankruptcy in 2009. The report shows many factors playing a part including $200 million in restructuring costs for GM’s European operations plus $427 million for currency fluctuations in Venezuela. However, the big item was a $1.3 billion charge for recall-related expenses.

Overall, the report was dominated by the recall mess GM is in. The recall is for ignition switches and it affects older GM cars. On these vehicles, the ignition switch may turn the vehicle off while driving it and can lead to airbags and other safety items not working correctly.
The recall has created a black mark on the company with CEO Mary Barra trying to head off the damage. GM executives have testified in congressional hearings, written public apologies and have tried to assure the public that GM is a new company that is tackling the problem head on.

In 2013, General Motors launched two new half-ton trucks – the Chevy Silverado and GMC Sierra. These truck launches were widely criticized for not following the normal pricing pattern in the industry. Normally, trucks are introduced and then incentives and discounts are offered to attract customers. The idea is to spur on sales and capture market share with the launch of a new product.

Instead, GM didn’t offer much incentives and kept prices higher than anticipated. This pricing strategy helped them keep more profit from these models, yet it cost them market share.

In March, 2014, Ram trucks passed the Chevy Silverado for the number 2 spot in full-size truck sales (Ford is number 1). Ram had been chasing Chevy for years and the passing of Chevy was a shock to everyone.

The significance of Ram passing Chevy may not seem like much, however, in full-size trucks, where brand loyalty is huge, it was a big event. The fact is full-size truck buyers are some of the most brand loyal customers in any marketplace. Many are die hard Ford, GM or Ram buyers who continually buy new models – regardless of what competitor’s products are.

While many companies talk about “conquest” customers or those customers who buy a different brand, it isn’t more prevalent than in full-size sales. Full-size truck manufactures know that once they can get someone to try their product, that customer will likely buy several more. Also, their offspring may buy their products as well.

With the idea that a truck buyer will buy several products throughout their lifetime from you, it is paramount to keep that customer loyal. GM’s decision to not offer discounts may have leaded some diehard buyers to try other brands with lower prices. This is now, costing GM significantly more now to get those customers back.

For the past few weeks, GM has started offering more aggressive incentives to stem the loss and increase back market share. GM hopes these incentives will help its sputtering truck sales and show investors it isn't losing any more market share.

Ultimately, in short-term, holding to their pricing strategy worked to increase profit and not report a first-quarter loss. Long-term, it may have cost them millions.