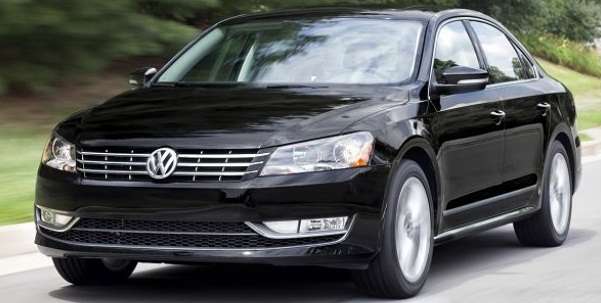 Coming in the second half of this year is Volkswagen’s updated 2.0-liter TDI Clean Diesel engine, designated EA288. It makes its appearance on the 2015 Mk7 Golf, Jetta, Passat, Beetle, and Beetle Convertible (the only diesel convertible sold in America).
Advertisement

While this new TDI may appear to be a mild retweak, it shares nothing in common with its predecessor, sans cylinder bore spacing. Volkswagen burned the midnight oil in an attempt to reduce emissions, while upping efficiency and improving throttle response. This was done by several tricks to the mill: such as the use of a complex exhaust gas recirculation system; an intercooler integrated within the intake manifold, then packaging the exhaust after-treatment components close to the engine. Enhancements continue with modifications that help minimize friction, resulting in further optimized fuel economy. This includes low-friction bearings for the camshaft and balancer shafts, reduced pre-tension piston rings, and a two-stage oil pump with volumetric flow regulation.

While the new engine enjoys a 10-hp boost of horsepower, from 140 to 150 (or 111 Nm), torque remains at 236 pound-feet (or 320 Nm). Performance and fuel economy numbers were not available at this writing; however Volkswagen promises significant improvements for each.

Volkswagen first offered a diesel engine for the American market with the 1977 Rabbit, which incidentally was the very first Volkswagen model to be built in the United States. Though it was a smelly, clanking and an underperforming oil burner, it was an answer as the result of the Oil Embargo of 1973. Since those dark days of fuel shortages and long agonizing lines at the pump, Volkswagen has sold more over a million diesel-powered cars and SUVs in the United States. Last year, there was 105,899 Volkswagen and Audi diesel models sold, making it the first time to pass 100,000 sales in a calendar year. That represents nearly 75 percent of the total U.S. diesel sales for passenger cars and SUVs.

Volkswagen has had tremendous success with its TDI technology, making it one of the most popular diesel engines on the market. Diesel technology in general has certainly come a long ways; no longer do we have to deal with glow plugs, inadequate performance or soot on the rear bumpers.

For 2013, the ever popular TDI Clean Diesel Volkswagen models accounted for 24 percent of sales, the best results on record. On average, TDI models deliver up to 30 percent better fuel economy and 12-30 percent lower carbon dioxide emissions than comparable gasoline engines.

John Goreham wrote on March 19, 2014 - 12:45pm Permalink
I think it is fair to say the last sentence is Volkswagen's own opinion. None of the Volkswagens on sale in the US market are the fuel efficiency leaders in their segment, and none have lower CO2 emissions lower than the leading gasoline engines in the segments in which they compete.