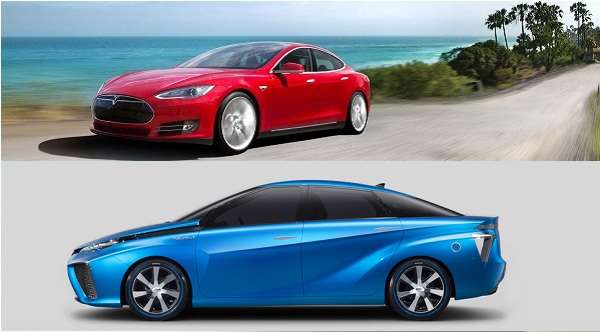 Will Tesla and Toyota ever get back together? Musk thinks so

After ending its collaboration with Tesla on the RAV4 EV and repeatedly declaring its allegiance to fuel cells, it certainly doesn’t seem like Toyota is interested in another partnership with Tesla. Not so fast, says Elon Musk.
Advertisement

Tesla and Toyota are two pioneers in the green car segment that have very different visions of what the future will look like. Sure, the companies collaborated out of necessity on the RAV4 EV compliance car – but now that that vehicle has reached its allotted volume, Tesla and Toyota are surely done working together, right?

Tesla CEO Elon Musk doesn’t think we have seen the last of Tesla and Toyota together. Automotive News reports that Musk, speaking at the delivery of the first Model S sedans in Japan, indicated he expects there will be a new and bigger project between the two automakers relatively soon.

“I think that if you look out maybe two or three years from now, that I would not be surprised if there is a significant deal with Toyota,” said Musk. “My best guess is that it would probably be something significant, maybe on a much higher volume level.”

Remember, Toyota does own a 2.4% stake in Tesla. The Palo Alto disruptors supplied the powertrain components – battery pack, electric motor, and associated power electronics – for the RAV4 EV that first went on sale in September 2012. Toyota lost money on the RAV4 EV and never intended to sell it in more than compliance volumes, though, and the deal between the two companies has effectively expired as the last of the 2,600 vehicles are sold.

However, Toyota has been quite clear recently that it sees a very limited future for electric vehicles, which it publicly seems to believe will always be severely hindered by low range. Regardless of its actual view on EVs, the Japanese auto giant has devoted much of its attention to hydrogen fuel cell vehicles, which Musk has famously called “fool cells,” “bullsh*t,” and “mind-bogglingly stupid.” Agree to disagree is putting it mildly.

Will they put aside their differences?

It certainly doesn’t look at the moment like a renewed partnership between Toyota and Tesla is likely. For its part, Toyota reportedly has “nothing to say” about Musk’s latest comments. However, Musk expressed a “huge amount of respect” for Toyota and claimed that Tesla loves working with and still can learn much from the Japanese automaker.

So where is Musk’s optimism coming from? Toyota has no current (public) plans for an EV, even another low-volume compliance car to satisfy ZEV rules. But some are skeptical that the upcoming Toyota fuel cell sedan will sell in great enough numbers to meet the company’s ZEV requirements without help from a new electric vehicle.

Musk did refer to a “significant” deal, perhaps indicating his expectation that Toyota will want to produce an electric vehicle at much greater volumes than the compliance RAV4 EV. Our own John Goreham has speculated that Toyota could be planning an all-electric version of the iconic Prius, which would sell in respectable volumes. And using the Prius architecture Toyota might not even lose money on it, especially if it bought batteries from the Tesla Gigafactory.

It is possible that Musk has inside knowledge of Toyota’s plans for a future all-electric vehicle, and this is his way of revealing it. We don’t doubt that if Toyota were to produce an EV, it would likely look to Tesla to once again supply the batteries at the very least.

The most likely source of Musk’s confidence, however, is the simple fact that Tesla will soon have a massive Gigafactory up and running capable of producing lithium-ion battery packs far more cost-effectively than has ever been achieved.

Some fear that Tesla will suffer from oversupply as a result of the Gigafactory’s size, but we would argue that Tesla will not have a problem finding homes for those low-cost battery packs. A partnership with Toyota would be a logical use of any capacity not needed to power Tesla vehicles.

A less ambitious possibility could be that Tesla would supply Toyota with the batteries necessary to supplement the fuel cell stack in its hydrogen-powered vehicles. However, the battery packs in fuel cell cars are small – the Hyundai Tuscon FCV has only a 1-kWh pack, for example – so any deal to supply batteries for low-volume fuel cell vehicles wouldn’t amount to much.

Of course, Musk could be totally wrong and there will be no future partnership between Tesla and Toyota. However, we have a feeling that Toyota will come around to battery electrics as a complement to their fuel cell cars at some point in the next few years, and when they do, Tesla will be waiting.

Weapon wrote on September 9, 2014 - 6:32pm Permalink
Well actually, I remember an executive from Toyota saying that they do plan on working with Tesla on future projects after the RAV4 was announced ending. Though that may have just been a formality thing. Overall, I think Toyota will end up working with Tesla for same reason Sony caved in and started working with Samsung on LCD. The issue here is, Toyota is saying affordable fuel cell cars won't be ready until 2025+. Tesla Model 3 will come in 2017, which gives Tesla a whole decade. Can Toyota really sit there and afford not to compete? With the gigafactory up and running, Tesla would be open to Toyota making gliders because we need to remember that it is not only about battery production buy glider production. So Tesla might be a year or so behind in glider production vs battery production. Now they can dedicate that production to storage systems but would also be open to letting Toyota build their gliders.
mike w wrote on September 9, 2014 - 6:52pm Permalink
It may be possible that Toyota is planning a "backup" EV when their FCV fails to sell in the required numbers. Toyota has publically stated in the past that they were working on solid state batteries and that they would produce a EV with a 200 mile range. It does make you wonder why Tesla would build a factory to turn out 500,000 battery pack unless they were planning on supplying batteries to other manufacturers.