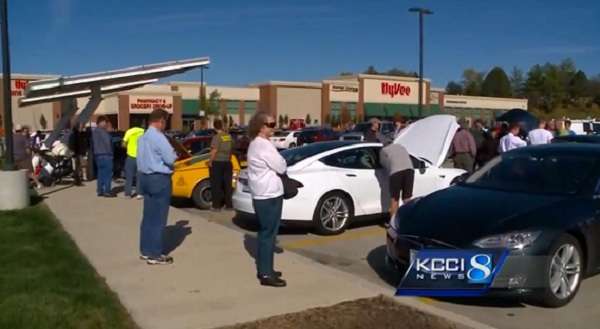 As Tesla continues to fight for the right to sell vehicles direct to consumers on a state-by-state basis, Model S owners in Minnesota got together to bring the Tesla experience to their neighbors to the south.
Advertisement

Tesla’s struggle against auto dealers has been well documented here at Torque News and all over the internet. In some states, Tesla is limited to a specified number of its company-owned stores – in others, the company is not permitted to sell vehicles at all. Michigan was in the news for its legislation banning Tesla from even opening a gallery or service center.

And earlier this month, Iowa joined the short list of states that prohibit Tesla-sponsored test drives as the state’s Department of Transportation cut short a three-day event that was deemed illegal, since Tesla is not licensed as an auto dealer in Iowa and cannot sell direct to consumers per state law.

This weekend, a group of Model S owners mostly from Minnesota took it upon themselves to provide test drives for interested Iowans and advocate for their beloved electric vehicles. The volunteers showed off their cars, took people for rides, and even get together with local enthusiasts who brought their own electric rides.

"A group of passionate Tesla owners from Minnesota who heard that their Iowa neighbors were being denied the chance to experience the [Model S] due to the DMV's interpretation of laws that shield auto dealers from competition," he wrote, "are opening up their doors and letting you hop inside their own Tesla vehicles."

The event in Urbandale drew attention from Des Moines-based news station KCCI 8, which ran a nice feature on the small rally and even reminded viewers that they can still purchase a Tesla online (although delivery cannot be taken within Iowa borders).

The most convincing advertisement

Electric car owners are the most satisfied customers in the auto industry, and they are often eager to share their excitement. Even GM is beginning to appreciate the power of grass-roots EV advocacy.

This group of Tesla owners is one example of how electric vehicle owners can advance the cause of the new technology. Public perception of electric cars is beginning to change, thanks in large part to Tesla and the growing numbers of EV drivers out there talking their friends, families, and coworkers’ collective ear off about their cars.

The rally gave Model S bonus exposure in the Hawkeye State, though it will have little effect on Iowa’s ban of Tesla direct sales. Dealers will continue to put up stiff resistance against the Tesla business model that they fear so much, and we will continue to follow the entertaining game of legislative Whack-A-Mole that Tesla is forced to play.