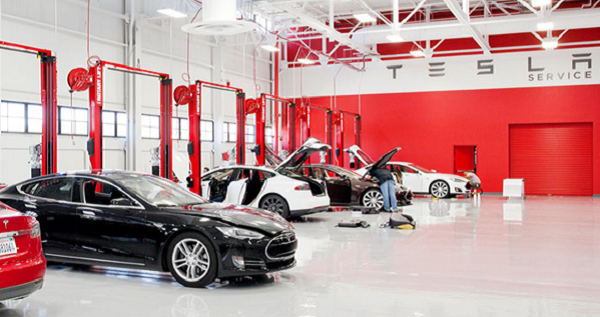 The makers of Model S have been in the news recently for a higher-than-normal rate of total drivetrain replacement, with several highly publicized examples. Tesla has deftly responded by offering a nearly unrivaled warranty.
Advertisement

A startup automaker is bound to have some quality problems as it endures the growing pains of scaling up to mass production. Recent reports of Tesla Model S drivetrain failures in alarmingly high numbers, particularly the high-profile failures of the Edmunds test car (it has had four total drivetrain replacements), have indicated that even Tesla Motors is not immune to the quality control perils of a young company producing a new product.

At the time, Edmunds called out Tesla for not offering a powertrain warranty - Model S only came with a new-car limited warranty for 4 years or 50,000 miles, and the option of a $4,000 extended service plan.

So what does a young company do to restore its glowing image? Fix the underlying issue and offer an impressive warranty to back it up. Tesla thinks it has resolved the early-production problem that led to the majority of the drivetrain replacements, most of which were done proactively.

To combat all the negative press and generate more of the positive publicity that Tesla is accustomed to, CEO Elon Musk released a blog post detailing a new powertrain warranty that will cover the drive unit (in addition to the battery) for 8 years and infinite miles for the 85-kWh versions of Model S. The 60-kWh vehicles will get a warranty for 8 years and 125,000 miles. The closing statement of the post is below:

“To investors in Tesla, I must acknowledge that this will have a moderately negative effect on Tesla earnings in the short term, as our warranty reserves will necessarily have to increase above current levels. This is amplified by the fact that we are doing so retroactively, not just for new customers. However, by doing the right thing for Tesla vehicle owners at this early stage of our company, I am confident that it will work out well in the long term.”

Tesla is applying the warranty to “all Model S vehicles ever produced,” indicating that Musk and his team are very confident in the reliability of electric motors and in their fix of the previous problems that appear to have been relatively minor.

The impact of the new warranty

As Musk acknowledged to investors, the warranty will not come without cost. Applying the warranty retroactively opens the door for a potentially great number of drive unit fixes – but the good news is that Tesla has discovered it can make the repairs at very low cost.

From the start of the drive unit replacement debacle, Tesla has been very worried about customer happiness. In many cases, the company’s technicians swapped out the drive unit without even a firm diagnosis simply in the interest of customer convenience.

Given that Tesla believes the problem was isolated to early production and the fixes have been identified and are inexpensive, the company’s bottom line shouldn’t take too much of a hit from the extended warranty. In the future, the company won't need to actually replace the drive units.

The only downside to the new warranty is that customers who purchased the $4,000 extended service plan, as Edmunds "HIGHLY [recommended]," are probably pretty irritated.

In the end, Musk and Tesla want to ensure that their reputation remains pristine. Taking the long view in this case will certainly work out to the company’s benefit. The upgraded warranty will help counter the bad publicity from the failures and will boost consumer confidence, making it a shrewd move regardless of how many $0.50 shims Tesla needs to insert in Model S drive units.

Weapon wrote on August 16, 2014 - 6:10pm Permalink
The extended warranty covers more than just drivetrain. So the question comes down to if they bought the extra warranty because of the drivetrains or just in general. As for why this will cost them more in the short-term. Musk is probably talking about the SEC requirement that Tesla fund the warranties in advanced. So an extension of the warranty has to be prefunded. Since there are 40k cars on the road is it? Tesla needs to prefund all those cars in 1 quarter. Once that is funded, from then on it would have no real impact on their finances.
WiseOldMan32 wrote on August 16, 2014 - 10:02pm Permalink
The problem is the Tesla keeps breaking down. If GM made Tesla, there would have been a great protest and bad press etc. Tesla has been given a free pass long enough.