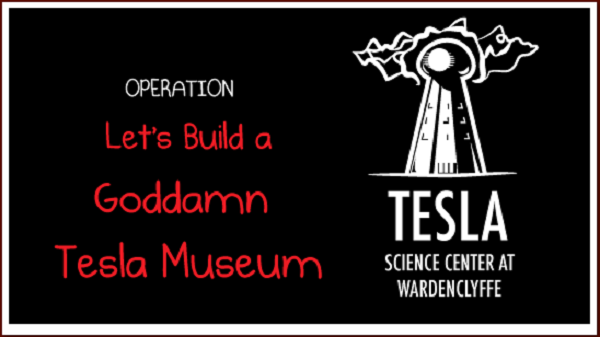 Nikola Tesla was one of the most brilliant people to ever live, yet was largely unappreciated in life and after his death. Tesla CEO Elon Musk will donate $1 million to help make sure the inventor is honored properly with a Tesla museum.
Advertisement

You have almost certainly heard of Thomas Edison. You may not have heard of Nikola Tesla, and that is a travesty. To be short, Edison ain’t got nothing on Tesla. Go ahead and read this post by Matthew Inman, cartoonist of The Oatmeal, elaborating on “the mustache-donning, lightning-conjuring, electrical WonderJesus known as Nikola Tesla.” Inman is no historian, but he is far more entertaining than one.

Inman has campaigned in the past to convert Nikola Tesla’s former laboratory at Wardenclyffe in Long Island, New York into a Tesla museum. He launched a crowdfunding campaign that raised $1.37 million from over 33,000 contributors, enough to buy the property and save it from being demolished and turned into a shopping center or something similarly terrible.

However, millions more would be needed to actually build a museum and many felt that Elon Musk, CEO of Tesla Motors, should step up to the plate and contribute. The company has no direct connection to Nikola Tesla or any of his family members, so it was reasonable to expect that Musk should acknowledge the name he used for the electric car company that has brought him great wealth in an appropriate way.

Musk was open to the idea from the start. And as livescience reports, Musk has now officially pledged $1 million to the cause. Though $1 million won’t be enough to build the museum, it gives the project some momentum. Musk will also have his company install a Tesla supercharger at the site.

The proposed museum will feature Tesla’s numerous inventions and their impact on modern life. Museum organizers indicated it will also include a lab for people to build prototypes of their own inventions, and an “innovation station” for entrepeneurs to turn their ideas into real products.

It is wonderful to see Nikola Tesla get the recognition he deserves. The man who would have turned 158 years old on July 10 pioneered inventions like alternating current, radio, radar, X-rays, and many others, yet was not appreciated for his genius in life. It was the least Elon Musk could do to help build a museum in his honor. In fact, it could be argued that Musk should have given more. But we won’t make that argument here.