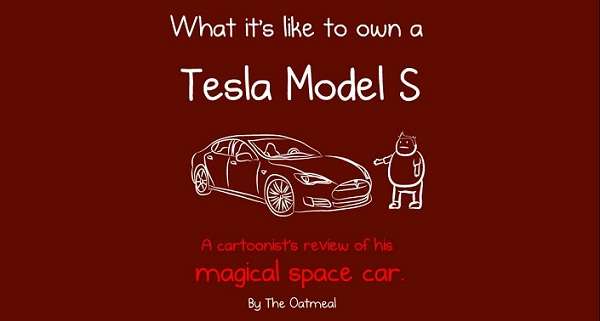 The Oatmeal: Tesla Model S is a 'magical space car'

The Tesla Model S has received its share of rave reviews from owners. One of the most prominent and entertaining reviews of all comes from Matthew Inman, cartoonist of The Oatmeal.
Advertisement

The online collection of lengthy and humorous cartoons known as The Oatmeal recently posted a review of the Tesla Model S, which creator Matthew Inman apparently owns. And boy, does he love his Model S.

Amid plenty of illustrations and gloriously colorful language, Inman writes the longest and most entertaining review of Model S that we have seen. We strongly encourage you to click the link here to read it in its entirety; in addition to its (admittedly simplified) technical and factual accuracy, Inman uses phrases like ‘My Intergalactic SpaceBoat of Light and Wonder’ and ‘My Electric CruiseBeast of Protons and Wormholes’ to articulate his love for his Tesla.

The cartoon covers pretty much every aspect of a Tesla: charging and (lack of) range anxiety, appeal to geeks rather than car guys, creative alternative names for Model S, retractable door handles, ‘Ultra Stealth NinjaCar’ silence, the frunk, the ‘freaky’ acceleration, a colorful description of the car’s handling abilities, the touchscreen, smartphone integration, safety, battery fires, the sun, and Tesla as a company.

To summarize, Inman gives his Model S a rating of 100 stars out of 100, plus several other celestial objects and...well, you’ll just have to read the comic. A warning – when we said colorful, we meant it.

Also of note here is that Inman is a self-professed fan of Nikola Tesla and was behind a crowdfunded effort that raised $1.37 million to protect Nikola Tesla’s New York laboratory site from development. Inman called on Elon Musk to help contribute toward the necessary $8 million to turn the site into a Nikola Tesla museum, and Musk has responded with a tweet of “I would be happy to help.” It seems as though the founder of Tesla the company appreciates the history and greatness of his company’s namesake.

Aaron Turpen wrote on May 16, 2014 - 3:50pm Permalink
Did you see the second half where he's asking Elon Musk to fund the Tesla Museum that this cartoonist saved from extinction with a Kickstarter?
Luke Ottaway wrote on May 16, 2014 - 4:00pm Permalink
Yep...I mentioned it in the final paragraph. Pretty cool, hopefully Musk contributes enough (or inspires enough contribution) to make the museum a reality.

LG's New EV Battery Plant Is a Welcome News for Tesla
Tesla Giga Berlin's New Hurdle: It's Not Only the Gov't, but Now Tesla Itself
END_OF_DOCUMENT_TOKEN_TO_BE_REPLACED