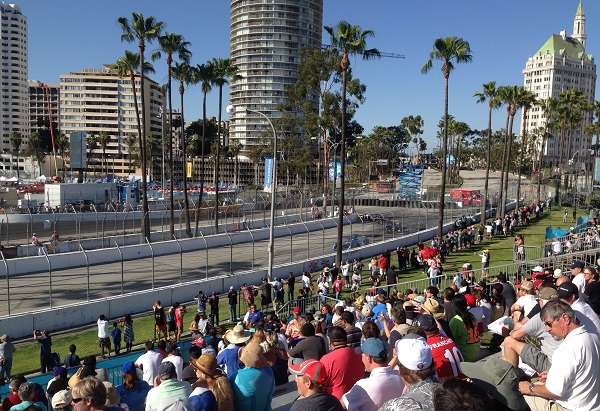 The promise of Formula E

It is not hard to tell that the Formula E all-electric racing series is in its inaugural season, or that advanced electric vehicle technology is still young. But oh, what potential the future holds.
Advertisement

I had the pleasure of attending the second Formula E race in the United States, the sixth race of the all-electric racing series’ inaugural season, in Long Beach this past weekend. The event did not disappoint, but more exciting than the race itself was the vision of what Formula E could become.

For those that have not yet heard of Formula E, it is an international racing series that showcases the current state-of-the-art in advanced electric vehicle technology – that is, the race cars are powered solely by electricity. No vroom, no smell of exhaust, no rednecks swigging Coors Light from lawn chairs in a parking lot stretching as far as the eye can see. Instead, it showcases elegant and (comparatively) quiet Formula 1-style cars on city-center road circuits that vary with the layout of the cities in which they are constructed.

Formula E is not the kind of motorsport Americans are used to. Which makes sense, because it was never intended to compete for the attention of NASCAR fans. Its first season makes just two stops in these United States out of 11 total races – Miami and Long Beach join cities like Beijing, Buenos Aires, and Monaco on the 2014/2015 calendar. The ePrix, as it is also called, pits drivers from all over the world against one another on urban circuits that make high speeds achievable only temporarily.

But that, and the lack of engine roar, does nothing to diminish the excitement. The stunning electric Spark-Renault cars can only reach top speeds of 140 mph, but they do so quickly – rocketing from 0-60 mph in 3 seconds despite a modest 270 hp electric motor. The courses are designed to reward strategy and cornering ability more than straight-line speed. And though the audience hears nothing of the rapid explosions accompanying conventional internal combustion racing engines, there is something thrilling about the high-pitched scream of the all-electric Formula E cars as they scorch the asphalt of city streets accustomed to a never-ending stream of dinosaur-burning urban traffic.

This weekend’s race was won in rather unexciting fashion by the Brazilian Nelson Piquet Jr., competing for China Racing, but nobody in the sun-splashed crowd seemed to care all that much who won the race. Most people were there to experience something entirely new and different in the world of motorsports, and the near-capacity crowd in downtown Long Beach got what it came for.

Aside from the novelty of the race, and the enthusiasm of California’s fervent EV supporters that turned out to see their beloved technology displayed in a new and exciting package, it was clear that Formula E is still in its infancy – and that the technology driving it has a long way to go.

Given the limitations of current lithium-ion battery technology, the race was only 39 laps long and lasted about 40 minutes. Halfway through the race the drivers pulled into the pits not for a recharge or a battery swap but for a car swap, in which the driver hops out of one car and into another. The 28-kWh batteries, not much larger than that of a Nissan LEAF, can only withstand about 20 laps before expiring. Formula E gets around this problem by allotting each team two fully charged cars, but it still results in an undeniably short race.

For the casual racing fan with a correspondingly short attention span (or the non-racing fan who could be convinced to take in a race) this short duration is not the worst thing. But the limitations of current battery and motor technology also result in power restrictions that rob the cars of their true potential – though the full 270 hp is unlocked for qualifying, race mode sees the cars reduced to 200 hp. Safety was a paramount concern in this first season, which no doubt contributed to the conservative use of power, but the current level of technology is also a limiting factor.

The flip side of this, of course, is that there is great room for improvement. And considering how exciting Formula E already is, it is easy to be wildly optimistic about the future of the series. For example, this inaugural season has zero competition as far as the cars are concerned; each is the exact same vehicle, with a battery by Williams Engineering and a drive unit by McLaren. Next season, eight manufacturers will compete to field a car with the most potent powertrain (excluding the battery). In the third season, the battery will become fair game for improvements. Once this happens, the goal is for the cars to make it an entire race on a single charge.

Of course, battery technology is advancing steadily, and this progress will manifest itself in more and more exciting races. It is even more exciting to consider all the possibilities with limited-use racing batteries, free of the longevity restrictions of passenger electric vehicle battery technology. All those breakthrough chemistries that exhibit fantastic performance characteristics but can only last a few hundred charge/discharge cycles or even less? Fair game for a 10-race series. Granted, it will not be quite that simple and most alternative chemistries are years away from realization, but motorsports is an arena where the viability of such advances may be tested.

And that may be where the greatest potential lies: racing could be a great proving ground for new EV technology that could trickle its way down to the commercial market. As more players enter the game, advancements are inevitable, born from competition at the highest level. In addition, Formula E is a wonderful platform for bringing attention to electric vehicle technology, and dispelling once and for all the notion that electrified propulsion is not exciting or viable. It may just pick up a few new racing fans along the way.