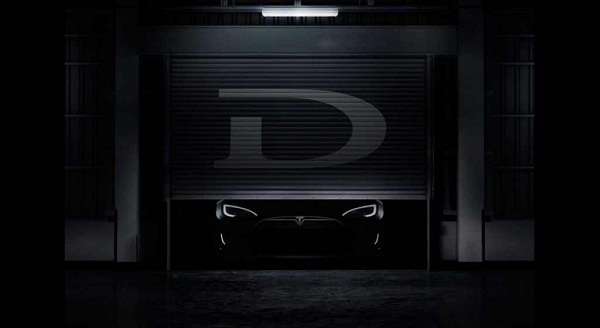 Musk ready to “unveil the D” and another surprise next week – what will it be?

Last night Elon Musk got the internet excited with a tantalizing (and unintentionally suggestive) tweet involving the letter D and “something else.” Let the speculation blitz begin.
Advertisement

Tesla Motors CEO Elon Musk loves making bold statements and knows how to play the crowd. The charismatic entrepreneur is also active on social media; Musk has more than 1 million Twitter followers, and he is known to keep them entertained with SpaceX updates and the occasional Tesla-related hints. Last night Musk took to Twitter to crank up the hype machine for whatever big reveal the automaker has in store.

“About time to unveil the D and something else,” wrote Musk, accompanied by the above photograph of what appears to be Model S and the date October 9, 2014.

What does D stand for?

Some media outlets have taken the announcement to mean that Tesla is unveiling a new vehicle called Model D. This is highly unlikely for a few reasons, not least of which we have yet to even see a prototype of Model 3.

The most plausible explanation for the letter D is a dual-motor AWD system for Model S, given that the company is developing all-wheel-drive for Model X and has hinted in the past that the system would eventually find its way into Model S. A VIN decoder, courtesy of our friends at the Tesla Motors Club (via InsideEVs), appears to confirm the dual-motor theory.

Okay, what about “something else?”

The more interesting speculation centers on what this something else may be. A few possibilities:

An upgrade to the Tesla Roadster, likely to the battery pack, which Musk has hinted at before.

A wagon variant of Model S, which we think would be intriguing.

A partnership with BMW or Nissan involving the Supercharger network, or faster charge rates.

Or a new higher-capacity battery pack, possibly in the 100-110 kWh range.

For real answers, we will just have to wait until next Thursday. Feel free to partake in the speculation in the comments below.