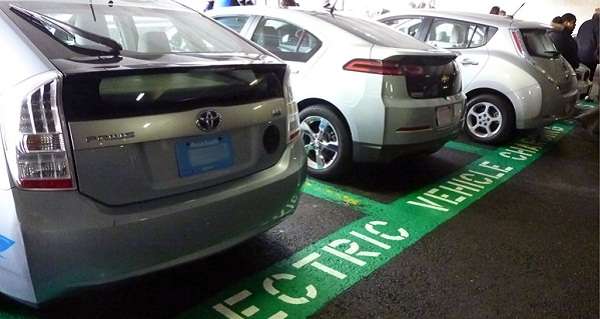 Massachusetts is serious about going electric with new rebate

Some states encourage electric vehicle adoption more than others through incentives and public charging infrastructure. Massachusetts has finally announced a new rebate program that vaults it to the top of the list of EV-friendly states.
Advertisement

Massachusetts is one of eight states, including California, Connecticut, Maryland, New York, Oregon, Rhode Island, and Vermont, to commit to adoption of zero-emission electric vehicles in a cooperative effort. The participating states, which make up 23% of car sales nationwide, have agreed on the goal that 15% of new vehicle sales will be clean energy by 2025. For Massachusetts, this effectively means 300,000 electric vehicles by 2025.

The Bay State has now improved its standing on the EV encouragement scale through a generous rebate program for buyers of electric vehicles. Governor Deval Patrick announced last week that state residents who lease or purchase a plug-in electric vehicle will receive a rebate of up to $2,500.

It will apply to both plug-in hybrids and pure battery electrics, although plug-in hybrids like the Chevrolet Volt will likely not be eligible for the full $2,500 (complete details are still to come). However, the key is that the incentive program is for a rebate at the point of sale rather than a tax credit. Georgia, for example, offers a $5,000 state tax credit on top of the federal credit.

Much has been made of that $7,500 federal tax credit for electric vehicles, and the fact that the buyer only receives the full credit if they paid as much or more in taxes that year. For example, if you only paid $5,000 in federal taxes the year you bought your car, that will be the value of your tax credit; you’ll get back the money you paid in taxes as a refund but you will not receive an additional $2,500 check.

The fact that the new Massachusetts program is in the form of a direct rebate rather than a tax credit will be a great driver of electric vehicle sales in the state. Another state initiative that may impact EV sales is the use of electric buses; the city of Worcester has six Proterra all-electric buses in its public transit fleet, and $1.8 million in grants have been earmarked for eight electric school buses.

These smooth and quiet buses could go a long way toward raising awareness of and enthusiasm for electric vehicles. The new rebate program and other state and local government initiatives will play a large role in helping Massachusetts reach its goal of 300,000 electric vehicles on the road by 2025.

Aaron Turpen wrote on April 1, 2014 - 12:04am Permalink
My state offers a huge rebate just for living here. Zero state income tax. I'll take that over any pretend rebate like yours any day.