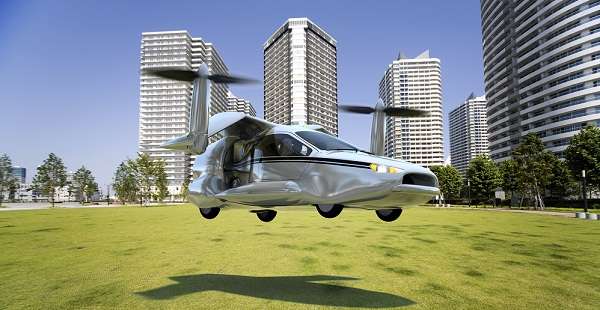 Someday in the future you may be able to back your electric car out of the garage, unfold its wings, and lift off into the air to proceed to your destination through the skies. And the future could arrive ahead of schedule.
Advertisement

The transportation landscape on the ground is changing, but it’s the airspace that truly intrigues people. Man has always dreamed of flying and has been soaring through the skies since the Wright brothers started it all over a hundred years ago. Today we have aircraft of all shapes and sizes, but none that double as a car. Pay attention to Boston-based Terrafugia – they are well on their way to changing that.

The company’s first prototype flying car, the Transition, is headed for production and could be delivered as soon as the second quarter of 2016 according to Terrafugia CEO Carl Dietrich. Not quite a flying car as much as it is a drivable plane, the Transition will set you back $279,000 and requires a sport pilot’s license. It runs on gasoline and is capable of air cruising speeds of 100 mph.

The next big thing from Terrafugia, however, is a plug-in electric hybrid “flying car” called the TF-X. Capable of vertical takeoff and landing, the TF-X will be highly autonomous; only 5 hours of training will be required to pilot the vehicle, as it will use a data network to plan the flight path. Dietrich says, “Once you’re flying, the actual operation of all flight control surfaces is going to be computer controlled because, frankly, the computer can do it better than a pilot.”

Okay, but how is it going to work? You can view a computer-generated video of the TF-X concept here. It claims the electric motors will be capable of producing a megawatt of power for liftoff from two 600-hp motors, which we imagine would necessitate quite a battery/supercapacitor. As the four-seater transitions from driving mode the foldable wings will unfurl and propeller stalks will rotate to create a helicopter-like configuration for all-electric vertical takeoff. Once airborne, the 300-hp fuel engine will activate for cruising at a speed of 200 mph to achieve a 500-mile range.

The TF-X concept is impressive but seems far off, and Dietrich agrees; the CEO estimates that realization of the project is 8-12 years away. Regulatory barriers as well as technological could combine to ground this ambitious prototype, but we will be pulling hard for the company to succeed. They have proven their abilities with the Transition that will soon become a reality for some, and as electrification technology develops and drones and other automated flight change the airscape this radical concept could become a lot more feasible. Stay tuned, but we remind you that patience is a virtue.

Ara wrote on April 30, 2014 - 12:17pm Permalink
I don't really see how these are practical, given the current state of things. I can see insurance for these things being absolutely unaffordable. Every accident will be in the $1 million + range in damage. Imagine somebody crashing into the Washington Monument or someother historical/high-cost structure? Or a mid-air collision from 100 feet up and landing on a crowd of people? At least when we are driving on the ground, there is at least a limit to the damage we do. I can definitely see $2000/month premiums for these things... which is a far cry from the $25/month I currently pay (from Insurance Panda.. woohoo!). So with a price tag at least multiple times more expensive than a Tesla, insurance policies more expensive than 99.9% of us can afford, and fuel costs that will also be thru-the-roof... I don't really see these things happening in our life time.