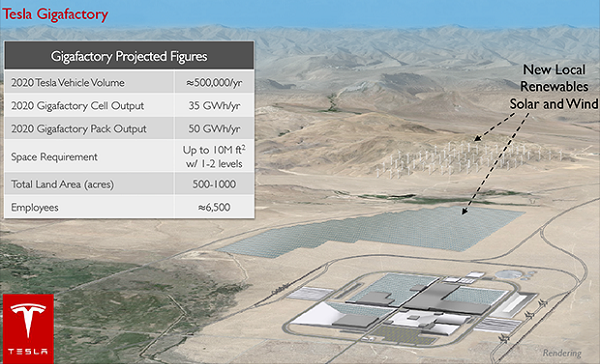 Could this Reno construction site be Tesla’s Gigafactory?

Since Tesla Motors is still keeping the chosen site(s) under wraps, some have taken it upon themselves to find out where the Tesla Gigafactory will be located. There is now strong evidence that Reno, Nevada is at the very least a final candidate.
Advertisement

Tesla’s planned $5 billion lithium-ion battery manufacturing facility known as the Gigafactory is a subject of great interest, particularly to potential stakeholders in Arizona, California, Nevada, New Mexico, and Texas. The five states are technically all still in the running, as Tesla hasn’t officially narrowed down the list yet.

Back in late April, Tesla Motors CEO Elon Musk told Bloomberg that the company would break ground in “at least two” states as an insurance policy against last-minute complications, as time is of the essence if the Tesla Model III is to be released as scheduled. The Gigafactory and its expected annual output of 500,000 battery packs will be necessary to support widespread deployment of Tesla’s most important car.

At the annual shareholders’ meeting in early June, Musk indicated that “sometime within the next month” Tesla would select and break ground at possibly even three sites.

Is Reno The Chosen One?

It seems that Musk’s plan is proceeding as promised. Emerging evidence has given Reno, Nevada good reason to get its hopes up: Greentech Media reports that a source discovered approximately 50 earth-movers hard at work at the Tahoe Reno Industrial Center.

Bob Tregilus, host of the Plug In America Show, hiked over the desert terrain to obtain a photo that strongly resembles what one might picture a future Gigafactory site to look like based on Tesla’s rendering – a vast desert clearing with rugged mountains rising in the background.

This isn’t the only evidence working in Reno’s favor, however. In early June, the Reno Gazette-Journal reported that the very same Tahoe Reno Industrial Center was the subject of a permit to begin site work on a massive project.

The parties involved are bound by a non-disclosure agreement; Lance Gilman, the industrial center principal and director of marketing, conceded that he had been working with Tesla “for months” but had not finalized any sort of contract.

"I am the man sitting in the chair that puts the transactions together," Gilman told the Gazette-Journal. "And I can tell you, I do not have a signed transaction with Tesla."

Which is just the sort of thing Tesla would tell him to say, as site preparation work may begin prior to the signing of a legally binding contract. The permit, meanwhile, specifies that 140,000 cubic yards of dirt may be moved at the site, roughly the equivalent of filling 180 dump trucks every day for 6 weeks. Not big enough for construction of the 10 million square foot battery factory, but certainly enough for preparations.

It ain’t official until it’s official

For these reasons, and those laid out by Jalopnik when it called Reno the most likely candidate to land the Gigafactory, Nevada can safely assume it is at least a finalist. The timeline of events surrounding the Tahoe Reno Industrial Center lines up conveniently with Tesla’s public statements, and it provides a suitable location for the Gigafactory for many reasons.

This does not, however, guarantee that Reno will house Tesla’s battery behemoth. All the evidence really confirms is what Tesla has said from the beginning: they will select multiple finalists and go through the process of acquiring permits and breaking ground at more than one potential site. That is all that has happened so far in Reno.

As recently as Monday, even underdog California was still convinced it could land the Gigafactory. And until they and the other states are officially ruled out, we can’t really assume otherwise. So the news from Nevada is exciting in that it represents hard evidence that something (might) actually be happening, and the Gigafactory has been kept very secret for the past few months. But the race for the Gigafactory is by no means over.