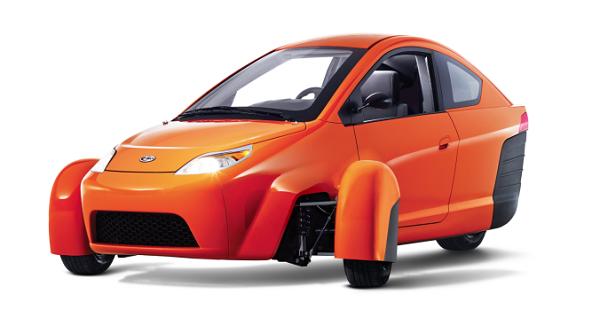 Yes, Elio Motors plans to introduce a $6,800 vehicle next year that will be capable of 84 miles per gallon the highway. The catch: it isn’t entirely a car.
Advertisement

Founded by Paul Elio in 2008, Elio Motors plans to change the way people commute to work every day. The company is offering a three-wheeled two-passenger vehicle that, while legally classified as a motorcycle, is far closer to a car and could find its way into a great number of American driveways. Though its targeted production was recently delayed from March to September 2015, this vehicle could still become reality.

The Elio Motors car (yes, that is its name) boasts a stratospheric 84 MPG on the highway and a more earthly 49 MPG in the city – the vehicle is clearly optimized for highway aerodynamics, requiring very little energy to slice through the air with a minimized drag coefficient and frontal area. Weighing about 1200 pounds, it will be powered by a 0.9L, 55-hp 3-cylinder engine coupled to a 5-speed automatic or manual transmission, depending on your preference.

Elio’s website claims 22,188 reservations already for the three-wheeled efficiency wonder. This number is likely inflated somewhat, though, by the fact that reservations can be had for as little as $100. The Elio Motors car is targeting production beginning sometime in 2015.

The vehicle will be available in all major U.S. markets and allegedly can be serviced at any Pep Boys. It will feature content from over 20 experienced suppliers and will be manufactured at a plant in Shreveport, Louisiana that will create 1,500 jobs.

Standard features on the Elio are bare-bones at best, and the company is not ashamed to admit it; stripping the vehicle down to the bare essentials is what allows such a low starting price. However, the Elio will come with climate control, an AM/FM stereo, power windows and doors, and a whopping three airbags.

How effective will those airbags be?

Fortunately for Elio, the car will be officially classified as a motorcycle. This will allow it to slide through under far less rigid safety standards than those passenger cars must adhere to, although Elio isn’t using that as an excuse. The company plans to put their vehicle through the same crash tests as regular automobiles and claims it will get top marks.

We are somewhat skeptical of the “top marks,” given that the vehicle will cost just $6,800 and the company doesn’t have the monetary or engineering resources to devote the same attention to safety as major automakers.

That’s not to say it won’t perform adequately in crash tests, though. Elio wouldn’t claim top marks if it wasn’t confident it would at least do reasonably well with the standardized crash tests. It will also come equipped with anti-lock brakes, traction control, and electronic stability control. On the road, though, it won’t fare well in a high-speed collision with a much heavier vehicle simply due to the laws of physics.

Following in the footsteps of Tesla

Elio Motors plans to adopt a sales model eerily similar to that of Tesla: the company suggests “think ‘genius-bar’ as opposed to in-your-face plaid jacket high pressure” with universal pricing, suggesting retail stores akin to Tesla’s galleries to sell direct to consumers. The key difference is that, being legally a motorcycle, the Elio Motors car can avoid the same legislative headaches that have plagued Tesla.

Customers will be able to customize and order their Elio at the stores, and traditional financing will be available alongside a bizarre optional payment plan involving a pay-as-you-fuel strategy enabling customers to pay for their vehicle over time each time they fill up the gas tank.

Elio Motors hopes to sell 50,000-60,000 cars in its first full year of production, eventually increasing to 250,000 units annually. The reason for such high hopes? As Paul Elio has said, the company wants its vehicle “to be an ‘and’ not an ‘or.’” Elio expects its car to be an addition to households that have a larger car for all-purpose use; as cheap as it is, the Elio can easily be added for commuting purposes only and save families a great deal of money on gas.

Jerome Vassallo, VP of sales, points out to Forbes that “as a commuter, 93 percent of the time you’re in a car by yourself.” Elio is targeting customers that want to save money on their commute while keeping a more practical vehicle at home. It is effectively a motorcycle for people that are worried about the danger and unfamiliarity of riding a motorcycle.

Obstacles in the road to realization

But there’s one of the major potential pitfalls: as a legal motorcycle, drivers in some states could be required to obtain a motorcycle license. Considering it is operated as a car, we believe a motorcycle license shouldn’t be necessary, but the details have yet to be worked out.

Another looming issue is that of helmet laws. If the vehicle is legally a motorcycle, the driver could be required to wear a helmet in some states, which would certainly be a huge put-off. It will be down to Elio to create exceptions for its vehicle if it wants to be universally appealing.

Then there is the question of whether the vehicle will be good enough to merit buying. Most reviewers of the prototype version came away underwhelmed with the experience, one saying it “didn’t feel like anything I would want to buy.” That was only a prototype, however, and the first iterations of any new vehicle are often rough approximations of the final product.

We’ll leave it to Vassallo to make the final argument for the Elio Motors car. “We’ll never get around the need for a big vehicle – there will still be boats to be towed to the lake and kids to be driven to soccer practice or school,” he points out. “But the kids and the boats don’t come to the office with us every day, and it’s wasteful to drive a big sedan or SUV with most of the seats unoccupied to travel maybe 10 or 20 miles at a time.”

It will be intriguing to find out if Americans will seriously consider his words. For some, the lure of a $6,800 commuter vehicle that could save thousands on gasoline every year will be more than enough. Here’s hoping this start-up follows the fate of Tesla rather than most every other automotive newcomer.

Would you buy an Elio? Let us know your thoughts in the comments section.