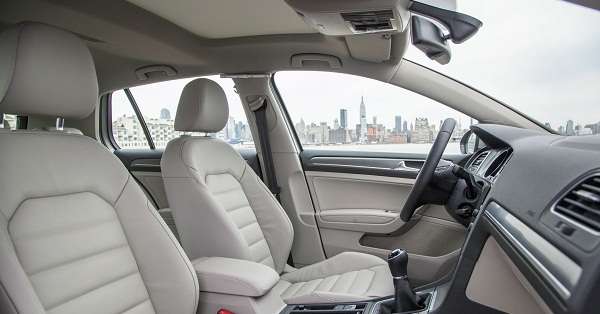 The 2015 VW Golf should definitely please the "Volks"

A detailed look at the 2015 Volkswagen Golf TDI and its heavily revised diesel engine.
Advertisement

From the outside if you look at any new Volkswagen Golf that has ever been introduced over the decades, you would be hard pressed to notice the sea changes that so often go on when these huge selling hatchbacks get redesigned. It’s just that Guigetto Guigaro who penned the first Golf hatchback got the shape so right that Volkswagen has only ever had to tinker with it to attract over 30 million buyers over the years. That’s a lot of people to be pleased by one car.

Over the course of the life of the Volkswagen Golf outside of the United States it has grown to be a powerhouse in the international diesel hatch sales market, most especially in Europe. But it wasn't until Volkswagen of America decided to reintroduce its latest generation 2.0 liter turbodiesel engine, itself already legendary for its efficiency and durability, to North American buyers with memories of smelly, loud and slow diesels from the 1970’s and 1980’s.

First off, this time around we were finally being granted the low sulfur diesel that Europeans had enjoyed for years and which was necessary for this VW engine to run properly. Prior to this, you really did used to get your hands smelly filling up with diesel but no longer. Honestly, the 6th Generation Golf TDI (as well as Jetta and Jetta Sportwagen) proved that there were no drawbacks to owning a diesel vehicle most especially when the alternative was possibly a Prius.

Now while some may say that the Golf TDI is just EPA rated at 30 city/42 highway, everyone by now must realize that those figures rarely are accurate. It’s just in the rare case of VW’s TDI clean diesel, most owners manage far better fuel economy averages. For instance, one owner we spoke to averaged about 38 miles per gallon in city driving and could easily and without slow lane hypermiling achieve 50 miles per gallon on long freeway jaunts such as the one from San Diego to Los Angeles.

So what about this new upcoming 2015 VW Golf TDI set to arrive on our shores most likely sometime around May of next year barring any delays? We know it keeps the Golf styling cues but ups the interior luxuries and perceived quality sufficiently to keep the competition playing catch up but what about the 2.0 liter turbodiesel engine that is so new and has no many newly redesigned parts that Volkswagen had to give it a new name? (Hint: it’s known to diesel-heads as the EA288.)

Oddly, the 2.0 liter 4-cylinder turbodiesel in the 2015 Golf puts out a very similar 150 horsepower/236 lb. feet of torque but those figures are more accessible in the rev range and also note that the motor has a higher redline this time around. VW estimates that buyers of the 2015 TDI will enjoy 22% better fuel economy as well as an impressive drop in exhaust pipe emissions. In a turnaround from the norm, this model is also over 200 pounds lighter yet the doors still close with that reassuring VW “thunk.”

Now, for the last generation Golf and Jetta SportWagen the majority of buyers opted for the TDI clean diesel motor and for good reason. It offers the traditional fun to drive Volkswagen virtues with the efficiency of a hybrid. As we said, the 2015 VW Golf goes on sale sometime in the spring of 2014 and for the first time all vehicles will be assembled in Puebla, Mexico with engines being produced at VW’s Silao, Mexico plant.

John Goreham wrote on December 4, 2013 - 5:03pm Permalink
A 22% improvement over its already impressive fuel economy would be amazing.
J. Hamel wrote on December 5, 2013 - 9:03am Permalink
Yes and having been lucky enough to drive the 2015 for about 10 minutes I can say it feels more powerful, smoother, quieter and the manual is a delight!