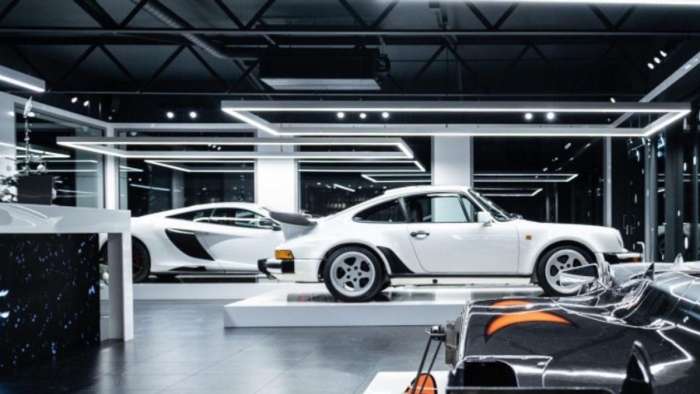 Stick this in your AMG One and smoke it: these Porsches are fitted with the actual engines that powered McLaren's Formula 1 cars in the mid-1980s.
Advertisement

Lanzante Limited is a British engineering firm that specializes in automotive unicorns, especially ones from McLaren. They're responsible for the P1 and Senna GTR road car conversions and won Le Mans in 1995 with an F1 GTR. It's the special relationship with McLaren that we have to thank for this wildly ambitious project, as Woking has agreed to sell Lanzante eleven of the 1.5 liter twin-turbo V6 engines that its F1 team used to win 25 of 68 races, three drivers' titles, and a pair of constructors' championships in the mid-80s.


The Original TAG-Porsche 930
Formula 1 was a very different animal back in the 1980s; a time of limitless budgets and the infancy of forced induction. It wasn't unheard of for teams to have entire engines set up for a single qualifying lap, with 1.5-liter four cylinders putting out 1100+ horsepower thanks to boost turned up so high that the blocks would melt as the cars returned to the pits. Into this wild world stepped McLaren's new boss, Ron Dennis, charged with reversing the team's fading fortunes. Dennis needed a turbocharged engine and it needed to work in harmony with the car's chassis. That meant a brand new design, so Dennis asked Hans Metzger at Porsche to come up with the V6 and poached Williams' title sponsor, aviation and motorsports company TAG, to pay for it. Thus, the TAG-Porsche twin-turbo V6 was born.

The new engine was installed in a 930-generation 911 for testing, and that car inspired the ones that Lanzante is almost finished building now. The new 930s feature many upgrades and improvements over the original prototype, but at their cores they all feature the same thing: a twin-turbo V6 engine that once powered a McLaren Formula 1 race car. It doesn't get much more special than that, with each of the new builds featuring a plaque denoting the names of the drivers that used the engine like Niki Lauda, Alain Prost, and Keke Rosberg, as well as its race results. Among them are nine podium finishers and the winner of the 1984 British Grand Prix.

An Incredible Undertaking
Lanzante partnered with Cosworth to tackle the daunting task of making near-forty year-old racing engines behave themselves in a modern road car. The first change made was swapping the period turbos out for smaller ones which are quicker to spool and allow drivers to comfortably use more of the engine's rev range, though they still produce 44 lbs. of boost to the original's 54. With the new turbos comes a reduction in power, down from 750 horsepower in race trim to a more reasonable five hundred and three with 310 lb./ft. of torque. Each engine is capable of reaching 9000 rpm

The transmission also received an update, with a mid-90s Porsche 6-speed with custom gear ratios installed to handle the V6's rather unique power characteristics. The new 930s make use of modern coilover suspension but the original and perfect RUF wheels remain, with the new cars weighing in about 500 lbs. lighter than the original prototype thanks to carbon fiber hoods and engine covers with aluminum door skins. The engines are water-cooled with radiators mounted in the nose and bespoke routing of all the necessary lines. Traction control is not included, not because the engineers couldn't incorporate it, but because they didn't want to. Top speed is 200 mph, and each one, already long-sold, costs $1,450,000 before taxes. Special, special cars.