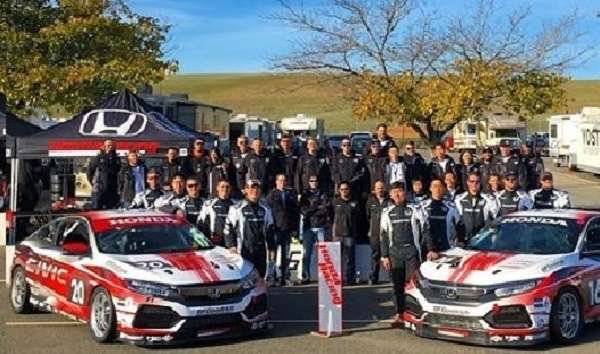 This weekend marks the official road endurance racing debut of the designed and manufactured in America 10th generation Civic Coupe. And although very modified, this is a bonafide endurance trial as to the mechanical reliability and racing-fuel-efficiency of Honda’s first turbocharged production based Civic.

With 10 drivers and 2 cars voluntarily built and driven by Honda employees participating at Thunderhill, National Auto Sports Association (NASA) 25 Hours at Thunderhill gets down to the nitty gritty of race competition. I drove the production 2017 Honda Turbo Coupe and walked away smiling.

Thanks to our friend Honda’s Davis Adams we have the headline photo shown above; thank you Davis. As to the driver lineup, and a factoid or two about Honda’s latest employee participating racing endeavor: *Team Honda Research is coming back to the 25, this year with two turbo charged Honda Civics. This is the first year for turbo engines in the Civic and the all Honda associate team is looking forward seeing how the cars will perform under the rigors of a day and an hour of racing.

"We are running two newly built 2016 Honda Civic Coupes," John Whiteman, race strategist and team co-manager said. "Because the Civics were developed in North America, they are truly an example of our mantra 'we race what we develop and develop what we race.' We have 10 drivers currently assigned to drive, five per car. All drivers are Honda associates from the U.S. and Canada. They driver lineup is Matt Staal, Lawrence Hwang, Derek Ferretti, Scot Nicol, Sage Marie, Mike Tsay, Doug Chan, Calvin Tam, Chad Gilsinger and, Brian Shanfeld."

"This is the first year for OEM turbo charged engines in the Honda Civic," he continued. "As such, we have had to learn about the new engines in terms of race conditions durability and how to optimize fuel economy versus performance. Team Honda Research is a 100% Honda Associate team that is the official race team of Honda R&D Americas, Inc. The team is supported by Honda Performance Development and American Honda Motor Co, Inc. While the race cars, transporters and equipment is owned by Honda all the associate hours for building and racing the cars is entirely voluntary and unpaid."