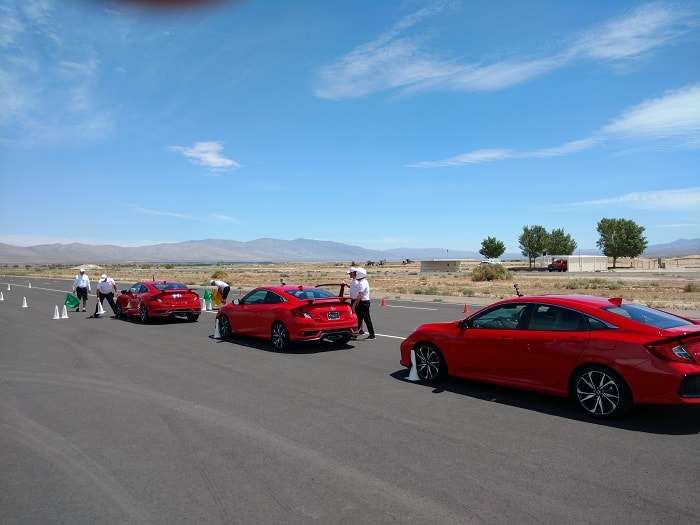 The 10th generation Honda Civic lineup just nailed MotorWeek’s Driver’s Choice Award 2-years running. With no shortage of good competition available in the small car category, Honda’s most innovative compact 4-door sedan and coupe offerings continue to gain consumer and automotive press accolades. While I’m not one of those gear heads sitting on the couch 24/7 watching car-T.V., I’ve watched my share of MotorWeek, and find most, if not all episodes entertaining and informative. As to auto reviews, MotorWeek doesn’t pull any punches.

The crew at MotorWeek likes 10th generation Honda Civic. But more specifically, when considering the competition, chose 2018 Honda Civic for top honors based on 3 Key performance factors, or variants if you will; a veritable performance Civic trifecta.

One of the rolling innovations leading to MotorWeek’s glowing accolade is a Civic of several firsts in North America and beyond.

Introduced several years ago in Detroit as a Car Show concept and then a prototype, is what we find today in the first Honda Civic to not only be turbocharged, but to earn the coveted Type-R performance designation. 10th generation 2018 Honda Civic Type-R is one of the key factors in MotorWeek’s consideration trilogy. Read my epic Civic Type-R drive adventure to the Redwoods here. What are the other 2?

2 variants round out Civic’s performance trifecta

In the words of MotorWeek’s editorial crew: “Jumping right in with our Best Small Car, we’ve already got our first controversy. Traditionally, we don’t bestow an award to any car more than two years in a row; but the latest Civic has been such a game changer, we had to evolve to keep up with it and think thrice. Truthfully, it was the fact that Honda unleashed not one, but two high-performance variants that really sealed the deal. You can get a mild upgrade in coupe and sedan from the Civic Si, or go extreme with the “Hot-n’-Hyper” Type R Hatchback,” says MotorWeek. I’ll leave it at that!

For MotorWeek. It was Civic Si coupe, sedan and the Brit built Civic Type-R hatchback that drove Civic to the front of the small car segment. The last 2 years have been one heck of a run for Honda Civic. What will the future bring? We’ll keep you up to date here at Torque News.

If you own a late model Honda Civic, I’d like to read your Honda experience, good or bad here. Your “share” is always appreciated.Cheers!