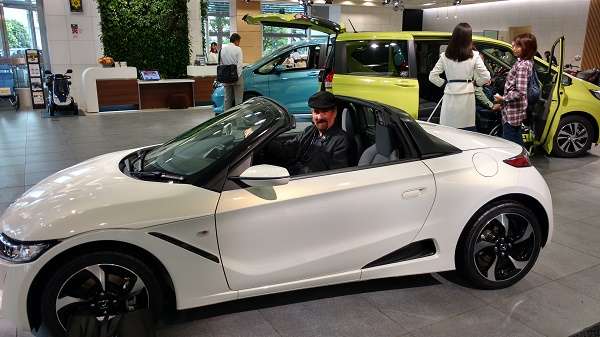 Honda S660 Roadster should be imported to the U.S.

Is the 2016 Honda S660 Kei car roadster large enough to seat a 6 foot 5 inch American journalist? I believe after sitting behind the wheel of a Honda S660 Roadster, this pocket rocket should be imported by the maker to the U.S..
Advertisement

I, like many Asian import car enthusiasts, ponder Honda’s exit from the compact convertible roadster market in the U.S.. After All, the Honda S2000 roadster of last decade is highly revered in sports car enthusiasts circles, and even in it’s original trim, could give the segment leading Mazda Miata a good run for the dollar.

In speaking with my new friends at Honda’s World Headquarters in Tokyo, Japan, (thank you Honda) Honda of Japan has held off on the export of micro cars and light trucks to North America -- due to the prevailing perception that micro or “Kei” cars will not sell in North America. Such is the argument for not exporting Honda’s exceptionally good looking, mini-proportioned S660 Roadster.

Viewing the S660 in person

However, after viewing the pocket roadster in person, and gingerly entering, and then sitting on the driver’s seat, I find that positioning my rather large frame into a viable driving position -- on one of Honda’s better seat-- is very doable. I like the S660. Now, I won’t B.S. you as to the generally tight proportions of this made specifically for the Japanese market 2-place. It’s a bit tight for me. But, for the average sized American -- 6 foot 2 inches, or shorter of reasonable girth, this very ‘cool’ runabout is a viable and affordable alternative to a touring motorcycle, or, dare I say it, Mazda Miata -- like the one parked in my driveway today.

Albeit quite a bit smaller than Miata, and step sister Fiat 124 sport spider, In Japan, the MSRP on this exceptionally well finished, (mini NSX) and well proportioned drop top, starts around $17,000 or so, well appointed. I found getting in and out of S660 doable. And, with the driver’s seat in the full back position, visibility out the windshield, and easy arms reach to all controls, shifting consul, door looks and levers was a snap!

As to driving around town with the top in the up position? That may be a bit of stretch for me -- I don’t know, I wasn't afforded the opportunity to drive S660 on the streets of Tokyo -- traffic is just a bit too crazy there. With a total body length shorter than the wheelbase of a 2016 Honda Civic, and a body width of a mere 51.8 inches, S660 is highly maneuverable in the city environment, yet exudes a “fat” tire to the road attitude conducive to aggressive driving -- something that the Japan specific S660 isn’t powered to do -- due to it’s mild tuned 63 horsepower/ 77lb-ft torque gasoline engine. But then again, S660 in a 6-speed manual transmission, mid engine, rear axle trim weighs in at under 1870 lbs. I believe that would work for me. As to fuel efficiency, think +50 MPG.

I like the idea. Although Honda hasn’t expanded on the initial buzz as to importing S660 to the U.S., reportedly with a larger displacement turbocharged 1 Liter 3 cylinder engine tuned to produce upwards of 127 horsepower. Honda president Ito-san, stated on the introduction of S660 in late 2014, ‘that if U.S. enthusiasts wanted the S660, he’d support export’ -- it hasn’t happened yet. What a sweet little ride