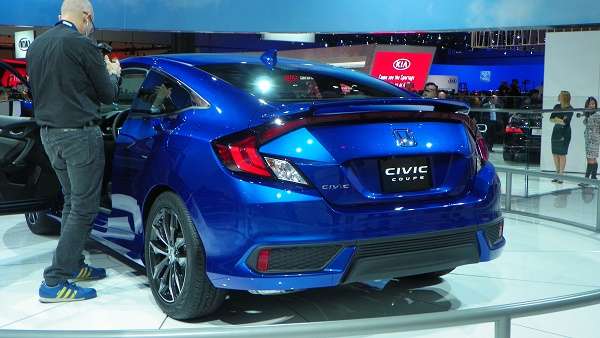 While attending the recent San Diego press introduction of 2016 Honda Civic Coupe, the handwriting was on the wall.
Advertisement

You could see the natural rear hatch compliant lines in the all new 10th generation Civic Coupe. So, for Honda of the UK to leak a very familiar artist rendition of what is reported to be the 2017 Civic Hatchback, was less of a surprise than a confirmation for those of us that follow the Honda brand.

Wednesday brought with it a flurry of photo previews, thanks to “Automobile,” and then “Car&Driver,” we have an unqualified visual glimpse into the near future of Honda’s next Civic Hatchback. Since the photo reads “Honda Design,” I’ll attribute the image to them. No surprise here. As announced by American Honda’s, Mr. John Mendel, all 5 of the 10th generation Civic variants share identical engineering DNA, as well as a common suspension and engine component or two.

The first time I viewed 2016 Civic sedan in Malibu, California, the future hatchback accommodating body design was quite evident -- today’s drawing from Europe confirms it.

2017 Honda Civic Hatchback will be a sales success in North America, with the venerable Civic Type-R not too far behind it.

After reacquainting myself with the 2.0 Liter powered normally aspirated 4 cylinder gasoline powered 6 speed manual transmission 2016 Civic Coupe, I decided that the logical choice for me, as to the purchase of a new Honda would be a Civic platform hatchback. After viewing the artist rendition of the hatchback concept, I look forward to driving one in the spring of 2017.

Tesla Contemplates A New Strategy for China Retail even As Sales Boom
Jay Leno on Elon Musk & EVs: “I Think He Should Get ... Credit"
END_OF_DOCUMENT_TOKEN_TO_BE_REPLACED