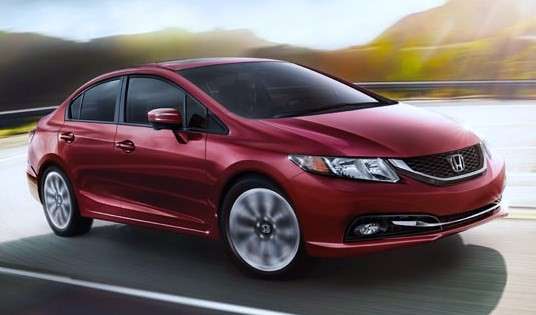 As reported Wednesday by Honda, according to IHS automotive, Accord and Civic were the best selling cars with individual buyers in California for 2014.

For a manufacturer, making it big in the World’s largest retail automotive market is akin to winning 7 gold medals in the Summer Olympics. A handful of players have done it, you can count them on one hand. In Los Angeles, epicenter for the world’s car makers, we find two standouts, Toyota and American Honda Motors. It’s the “David and Goliath” story of the automotive world, Honda holds the rock sling!

Yes, you will find every major and minor manufacturer’s offerings crawling the streets of Southern and Northern California. As children of the Sun, many played the “name the car and model game,” that’s what got us to where we are today; obsessive, compulsive, walking encyclopedias of car and truck trivia; remaining as excited as a 6 year old with a clown and pony carousel at his or her’s birthday party; on the news of the release of yet another new car or truck model.

For most Californians a car or light truck is a bit more than a chosen method of personal transportation conveyance, it’s a personal statement! A car choice can hint to a person’s economic status, thrift-tendencies, fashion sense priorities and personality. It’s a big deal, or not. Sitting in the epicenter of the automotive universe is Honda’s Torrance design center, to say that what comes out of Honda design is California influenced is a given..

Honda is California, and has been for the better part of 5 decades; you can see the California “Tuner” influence running like a flu virus through the design cue that is unmistakably Honda. While Civic has grown up a bit, it’s still Civic, the heritage is clearly conveyed through consumer- product-recognize-ability of quality branding.

O.K., Honda Civic blurs the line between sense and sensibility, by raising the bar on standard featured value and base model good looks

Sitting nationally at #1, Honda Accord rode the economic recover to near record sales in California for 2014, with 71,758 units sold, an increase of +17.3% from the previous year.

Honda Civic further managed a measurable increase in sales over 2013. Honda sold 67,293+0,5% Civics in California alone, despite fierce price and option competition from # 2 Toyota Corolla, Ford Focus, Chevrolet Cruze, and all comers in the nation’s largest auto market. Imagine the market impact of the release of this Honda Civic.

In comparing 2014, 2015 Honda Civic LX, based MSRP of $18,490 to the competition, a picture unfolds of exceptional, tech-rich, standard featured value housed in a quality, visually pleasing, “priced right” compact 4 door sedan. It doesn't look cheap, while performing much better than anticipated for the price-point. One isn’t compelled to make excuses for it.

Civic looks good throughout the lineup

You can take an entry level Civic LX, park it side by side with a top of the line Civic EX-L($22,840) and be hard pressed, outside of the rim design and tires, to find a visual difference in the two offerings; this is what Honda does best.

looking to the competition we find good value in Toyota Corolla, Chevrolet Cruze and Ford Focus. Each entry brings its own combination of ergonomic comfort, electronic-navigation, safety and personal connectivity features. Each brand offers their own take on engine and transmission technology, suspension tuning, rim design and color schemes. And yes, some come close to offering a total package approaching Honda Civic performance and purchase value.

When taking into consideration average fuel economy, initial purchase price, residual(resale value) and in most comparisons*(exception, Ford Focus) horsepower and torque, Honda Civic comes out the clear winner as to *overall purchase or lease value.

You may read our latest Honda Civic review here.