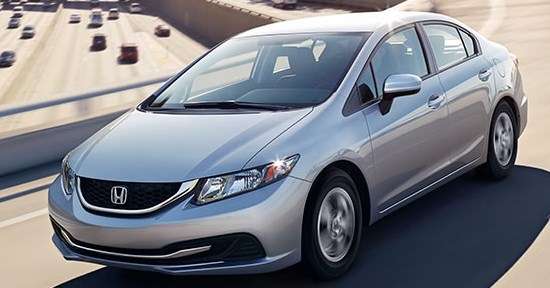 With no lack of competition coming from the small car classification, Kelley Blue Book picks 2015 Honda Civic as “Best Buy” for 2015. Civic may be the best small car buy in North America.
Advertisement

We like Honda Civic for its sensible good looks, value packed tech-driven standard features and reasonable performance. It’s not a rarity to catch Honda Civic receiving yet another accolade from the press, a testing agency of the Bible of automotive sales.

2014 was an exceptional year for Honda in many regards, with CR-V, Fit and Acura TLX capturing the imagination of consumers and journalists a like. But, is Honda Civic a superior purchase value when compared to Honda Fit, Mazda 3 and Volkswagen Golf? That may depend on what you’re looking for in a car.

Most motorheads like a success story and Honda’s is not only an exciting one but contagious. We’ve written at length about 2015 Honda Civic and Ci, so I’ll save some virtual ink. You may read about both variants here.

Four decades and still selling strong: Honda Civic’s been sold in North America for well over 40 years.To current and past generations Civic is as familiar as a Ford LTD in the Corn Belt; with a twist. They’re fun and affordable to drive, reasonably priced and retain the highest residual value in the small car classification. If you own one you already know that Civic is mechanically reliable and generally trouble free.

In short: One can drive Civic into the ground, change the oil, wash it and sell it within a week for more $ than anticipated. We've witnessed mid century Civics with 160,000 miles on the odometer sell for $7800. With a starting MSRP of $18,490, the Civic LX is not(initially)the cheapest offering in the small car segment. However, as stated by KBB, when adjusted for high residual value a $20,000 Civic will beat an $18,000 option with higher residual resale value.

When writing of 2015 Civic, our friends at KBB.Com say it this way: “A unique brand of refinement that touches every inch of the vehicle, in the simplest term, the Honda Civic is a good product that lasts.”

While not the flashiest offering in Honda’s lineup, the latest generation Civic does feature greater interior refinement than past generations; with much improved structure seating and covering, sound deadening, upgraded carpeting soft and hard trim surfaces. When driven,Civic, while not the hottest offering in the segment does provide more than adequate acceleration and exceptional braking when called on by the driver.

We find great value in Civic’s drive-ability and standard featured back up camera with directional lines, pinch and swipe infotainment and Bluetooth connect-ability. The list of standard and optioned features is a long one. For those wishing for a comfortable 5 place sedan with most if not all the bells and whistles, 2015 Civic may be your answer to affordable, reliable and safe Honda ownership.