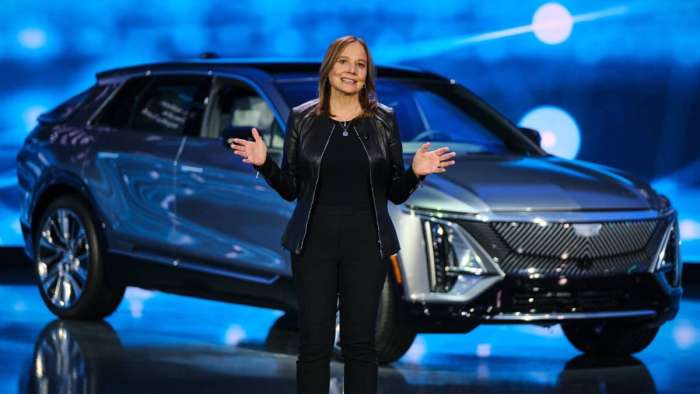 GM has been very transparent about various aspects of its long-term EV plans, but we have not heard much from Mary Barra on her thoughts on how GM is doing on these plans, as well as her views on competing with Tesla. The wait is now over with the GM CEO sharing her thoughts and views on the current pace of electrification within the company.
Advertisement

Barra made these remarks during an interview with Fox News Business and the "Claman Countdown." where she was pressed on the company's plans to churn out 30 all-new EV models by 2025 including an electrified $30,000 CUV (the Equinox EV) and a second model that will be priced even lower than that.

Related Story (2018): GM's CEO Mary Barra Promotes Electric Cars - Why She Herself Chose Not To Drive One

Barra highlighted that GM has already made "considerable investment" into the company's "Factory Zero" facility in Hamtramck, MI and revealed that the facility is already producing Hummer EVs that will be rolled out to dealerships by the end of the year which is a key stage in the facility's transition into being a high-value facility within GM's factory network. Barra also highlighted the recently announced Wallace Battery Innovation Center which is one of several battery cell plants that the company is constructing.

Barra was also to quick to highlight GM's diverse portfolio of EV models which she claims will help fill the needs of the customer not only on functionality but also pricing. If that sounds vaguely familiar, that's because this particular strategy has its roots in the brand management that former CEO Alfred P.Sloan laid out in GM's early years of business with his idea resulting in the creation of five different brands and price points. While GM is a far leaner operation versus the bloated empire that came crashing down during the Great Recession, Sloan's enduring legacy is evident in some pieces of the current EV strategy.

Barra Not Intimidated By Tesla, Promises To Outdo Tesla In Economy Segment

While Barra did point out that COVID-related constrictions will play a role in how some of the company's plans, the CEO revealed that GM is already making plans to make vehicles that could potentially fall under the $25,000 barrier. That would be a massive blow to Tesla who has often talked about entering the mass-market EV segment but has so far failed to deliver the goods on this promise despite their multi-year headstart.

Tesla is also facing renewed scrutiny of its controversial Cybertruck with some recent news that has emerged over the past few days. Not only has the company removed the pricing info for the truck, but also what was once considered the official specs for the truck.

The Cybertruck was supposed to be an answer to future rivals like the Ford F-150 Lightning, Chevrolet Silverado Ev and the Rivian R1T but it has so far failed to move beyond the engineering stage with no formal production models being built. That's good news for some of its rivals who will be pleased with the sizable headstart they will have in entering the EV pickup market.

LG's New EV Battery Plant Is a Welcome News for Tesla
Tesla Giga Berlin's New Hurdle: It's Not Only the Gov't, but Now Tesla Itself
END_OF_DOCUMENT_TOKEN_TO_BE_REPLACED