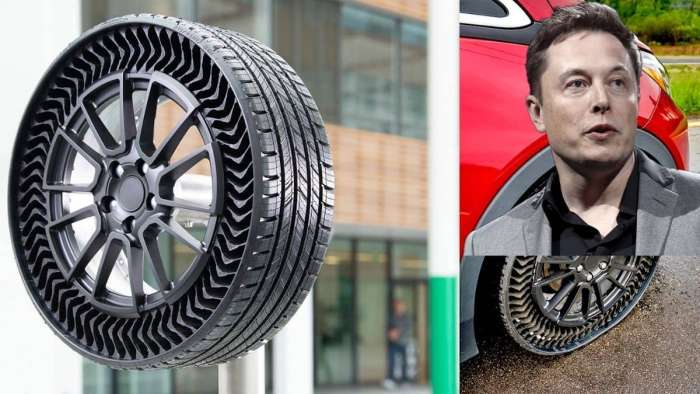 At the IAA Mobility Car Show in Munich, Germany, French brand Michelin presented its new airless tires. The Michelin “Uptis” took to the road for the first time in public on a Mini Electric car. The Tesla Model 3 Standard Range Plus (SR+) already comes with Michelin “Primacy MXM4 tires." Will Tesla adopt these revolutionary new tires for the Model 3, Model Y, and eventually, the Cybertruck?
Advertisement

This was an exclusive experience for some selected members of the public who had the opportunity to take a ride and test this revolutionary tire. It is worth mentioning that the Tesla Model 3 Standard Range Plus (SR+) already comes with Michelin “Primacy MXM4 tires” - that have a treadwear rating of 500, a traction rating of A, and a temperature rating of A (500AA)-; which should get around 40,000 miles at a reasonable cost.

The advantages of this type of tires are clear: first, you can never get a flat tire by a puncture or a blowout - Michelin says that some 200 million tires a year arrive at the scrapyard early because of them. Second, you don't have to keep an eye on the tire pressure; that doesn’t only save you time: it eliminates all premature wear caused by deflation. Its internal radii are adjustable to meet desired performance characteristics; its stiffness can be individually adjusted under acceleration, braking, cornering, and for handling bumps. Pothole handling characteristics can even be adjusted to eliminate the need for an independent suspension on some types of vehicles. Holes can be drilled through the tread to allow water to escape, potentially creating much greater resistance to hydroplaning. It takes less raw material and less energy to make them, which makes them better for the environment, and Michelin has estimated that they will last up to three times longer than a conventional tire.

However, it is clear that it’s not been easy to market: 16 years is a long and difficult time & labor for a product, that clearly attracts interest from people. The “tweel” (Michelin first announced the Tweel in 2005: the name is a combination of the words tire and wheel because the Tweel doesn't use a traditional wheel hub assembly; a solid inner hub mounts to the axle, surrounded by polyurethane spokes arrayed in a pattern of wedges), which replaces the entire wheel assembly, has long been available for various off-road vehicles, but has yet to hit the road.

Dubbed “Uptis”, this product is a complete wheel solution that requires specialized tires. Michelin claims that it will withstand much greater impacts than a normal tire and wheel, and that it will have a “spectacularly” longer service life, without adding rolling resistance, without giving the driver a different feel and adding just 7% in weight to the tire - less than the weight of the existing run-flat tires. GM will begin offering Uptis as an option on select models "starting in 2024", and the association is working with US State Governments and the federal government itself to obtain regulatory approvals for street use. In fact, in 2019, GM said Michelin's airless tire innovation can make flat tires a thing of a past.

As mentioned at the beginning, the Uptis airless tire had its public appearance at the IAA in Munich and, by all accounts, the experience was the same as driving on a normal set of tires. They did not feel different. But that's what it's all about, Michelin hopes to introduce new and improved technology without changing the user experience.

Will Tesla adopt these revolutionary new tires for the Model 3, Model Y, and eventually, the Cybertruck?

Putt-Putt wrote on September 16, 2021 - 10:46am Permalink
You make the statement "New Michelin Airless Tires for Tesla Model 3" in the title, then end by asking "Will Tesla adopt these revolutionary new tires for the Model 3"
Ray Hoskins wrote on September 17, 2021 - 11:53am Permalink
The title says may use
Putt-Putt wrote on September 17, 2021 - 12:57pm Permalink
The author corrected it after I commented
Ray Hoskins wrote on September 17, 2021 - 9:57pm Permalink
Thanks Putt-Putt. Thought that mayhave happened. Cheers
DeanMcManis wrote on September 16, 2021 - 11:59am Permalink
Yeah, that's the first thing that I thought about with this story was that I heard about this airless design many years ago. But it is a tough sell because we are already used to conventional tires, and generally they work just fine. There will have to be some real proven benefits of this tire design beyond just no flat tires, like cost savings or longevity. It could be great for many vehicle uses, if it catches on.
Clay Chase wrote on October 12, 2021 - 9:05pm Permalink
I have had a model 3 since Oct 2018. Over 140k and have had over 10 nail penetrations. I don't know what it is but these tires are nail magnets. I just saw a video from the Munich exhibition. It said 8 billion water bottles a year would be recycled to go into these tires. Also the article stated they would last 3 times longer. I currently, at my high rate of driving, change tires about every 6 months. Personally I'm very excited to try these.
Hugh wrote on September 16, 2021 - 6:11pm Permalink
Just another comment not attacking the whole idea. But someone should take these tires for a roll in a winter climate with two to three inches of snow and watch the snow/iice buildup within the tire creating a unbalanced wheel situation. Too bad the tire manufacturer didn't employ common sense engineers. Some sort of capping sidewall will still be required.
SCJeff wrote on September 16, 2021 - 8:27pm Permalink
When these first were shown, years ago, I assumed that the sidewalls were left open so people could see what the inside looked like. Now I'm not sure if that's the finished look or not. Your concern about ice and/or mud getting in there seems valid, but maybe the weight of a vehicle would crush anything that gets in there and it falls out pretty quickly? I'd sure hope that Michelin has tested these in cold and muddy situations.