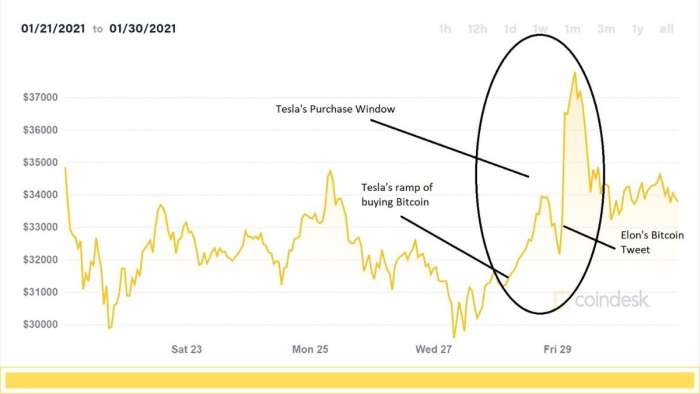 On February 8th, 2021, Tesla announced that it bought 1.5 billion dollars worth of Bitcoin. How much did they buy it for per coin? Didn’t Bitcoin go down a lot recently? Will that affect Tesla as a company in its Q2 earnings? Let’s see if we can figure this out.
Advertisement

It is well known that Tesla bought Bitcoin as announced on February 8th, 2021. You can read through an SEC filing for this Bitcoin purchase Tesla's SEC filing with Bitcoin. On page 46, Tesla states that they bought in aggregate, $1.5 billion worth of Bitcoin. This means the purchasing was done more than once and the combined purchases equals $1.5 billion.

Without knowing what each of these purchases was for, we can deduce that the purchases of the Bitcoin happened sometime between January 1, 2021 and February 7, 2021. Let’s look at some history to try and piece this together.

In retrospect, it was inevitable

Elon, what are you doing up so late?

Minutes before this tweet, Elon put #bitcoin as his Twitter profile description. I conclude that around this day and just before it was when Tesla purchased its Bitcoin. You can see the price of Bitcoin and when I believe Tesla purchased it in the chart at the top.

Tesla’s purchase was large and would have moved the price of Bitcoin. But not as much as a tweet from Elon Musk. Elon’s tweets move the price more.

When did Tesla Buy Bitcoin and for How Much?

The price just before Friday the 29th, where Bitcoin was just above $31,000 was when I believe Tesla started to buy Bitcoin. It’s possible that on the 28th, as it dipped from $34,000 down to just over $32,000 that they bought some more, but the rise after that dip is due to Elon’s tweets about Bitcoin. Here’s how I came to this conclusion.

Elon’s tweet about Bitcoin was at 3:22 AM EST on January 29th, 2021. This is right about the time the price jumped from just over $32,000 to over $37,000. This was right as his tweet happened. I don’t think Tesla’s purchase was during this time. Elon would have tweeted AFTER the purchase was done because his tweet’s RAISE the price of Bitcoin and Tesla would have spent more on it had Tesla bought then. I believe the purchase was done BEFORE Elon’s tweet, in the time before the 29th – possibly even the day before.

Tesla’s average buying price for Bitcoin is probably somewhere between $31,000 and $34,000, which is the range of the ramp in price the day before his tweets. For simplicity, I’ll just take the average of those two values, which is $32,500.

It’s also possible that Tesla bought Bitcoin on or before the 25th and that as the price went down on the 27th, Tesla decided to buy more and when Elon saw the price dropping back to $32,000, he decided to tweet about Bitcoin in order to keep it from going down more. We’ll never really know, since there aren’t any exact details about their Bitcoin purchases (besides the total amount), but I think this is in the ballpark of what happened with Tesla and their Bitcoin.

Finally, Tesla did sell some of their Bitcoin for a profit in Q1, 2021, so if Bitcoin dipped below Tesla’s buying price during Q1, 2021, it was overshadowed by selling the Bitcoin, 10% of it, for a gain when the price was a lot higher that same quarter. This means Tesla wouldn’t have revealed a loss in their Bitcoin holdings and hiding that loss (along with proving being able to liquidate it) were the reasons for Tesla selling some.

Now, there is the issue with the recent drop in Bitcoin to about $30,000 in Q2, 2021. Because this amount is less than what I believe Tesla paid for their Bitcoin, they will have to show a loss of some kind when their Q2, 2021 earnings report comes out (assuming they don’t sell for a gain). I’m very curious to see what this loss amounts to. Taking that number and the remaining 90% of their Bitcoin value, we may be able to decipher exactly what Tesla bought their Bitcoin for. Stay tuned for that.

What do you think – how much did Tesla spend to buy Bitcoin? Was this a wise decision by the company? Is there any concern that Elon Musk can move the price of Bitcoin up by $5,000 with a single tweet?