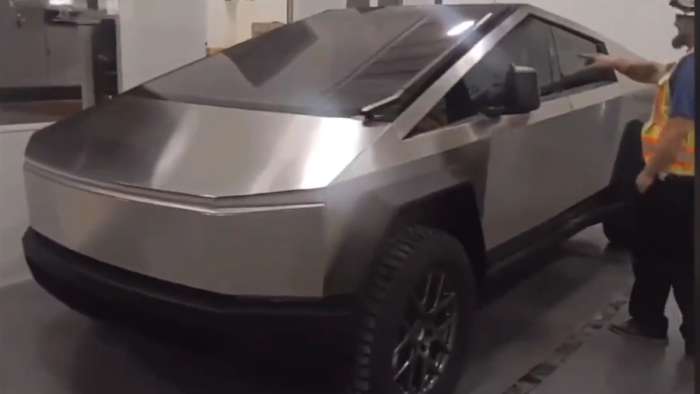 Video Taken Up Close With the Latest Cybertruck

We've got some videos of people who got an up close and personal look at the latest Cybertruck designs. It's a slick and strong looking vehicle and one participant said it was like riding in an oversized Model X.
Advertisement

Up Close and Personal With the Latest Cybertruck

We have some up close and personal video with the latest Cybertruck. Some lucky people got to see it up close and there is a 2 minute, 20 second video of it. I personally like the look and feel of it as well as the thin layer of lights that it uses for headlights. Let's take a look at what we saw:

From a group on FB pic.twitter.com/jsu6aBFwBG

This version of the Cybertruck has no door handles. It looks like in order to get into the car, you'll have to use a fingerprint reader, like the Tesla Roadster. The question I have is - what happens if you need to get in without a fingerprint scan? Can you just scan your Tesla card, or use the app on your phone to get in? Hopefully so.

What about if you want to exit the truck from the inside out? Hopefully there is a manual mechanism to allow opening the door from the inside out in case of an emergency or if the power on the truck isn't working. I think that would be really important. I would have loved to see the videographer get inside the truck.

There is a side repeater camera on the Cybertruck that got even smaller. From the looks of it, if you look closely above the wheel of the truck, you'll see what looks like a small hole in the frame above the wheel. I'm guessing this is actually the camera being mentioned that got smaller. That would be really interesting if Tesla was able to get their camera setup to blend in more naturally with the car and not be so visible.

Front Break is Now in the Front of Rotor

The rotors of a car are the large metal discs that are inside of each wheel. They are typically found on disc brakes and attached to the wheel by the vehicle's axle. The could be visible depending on the hubcaps your car has.

A key part of your vehicle's brake system, rotors are the large metal discs that are inside of each wheel. Found on disc brakes, the rotor is attached to the wheel by the vehicle's axle. The axle is the rod that supports the wheel on the car and allows the wheels to turn. Depending on the design of your hubcaps, the rotors may be visible.

To me, this means that the breaks of the Cybertruck are now directly in front of the rotor.

The front of the Cybertruck is shorter and I am quite ok with this. I'm not going to be using the frunk of the Cybertruck for much storage except maybe some tire repair kits or miscellaneous items. What I really want is enough space in the back to transport things around.

There appears to be a space above the bumper of the car, but below the lights on the front where this air intake could occur. There could be a horizontal and giant air filter there that allows for air filtration to occur. I'm going to also assume that this is going to have a built in HVAC system like the Tesla Model Y. After all, this truck is supposed to have post apocalyptic features.

There is still a giant wiper on the Cybertruck. Elon Musk has stated that he doesn't like this design and it will be changed. But so far, we are seeing it on every Cybertruck prototype we've spotted. And the wiper reaches all the way to the top of the windshield - it looks like it would cover most of the windshield in one swipe.

If Tesla isn't careful, this design is going to make it to final production :). I personally don't mind it.

My first impressions being a passenger at the Cybertruck reveal are:

1. How intimidating it looks at night.

2. How it felt more like a large Model X riding inside as a passenger in terms of handling, speed and performance. I think people will be most surprised by this.

What do you think of this up close and personal look at the Cybertruck? Will we see production early next year?