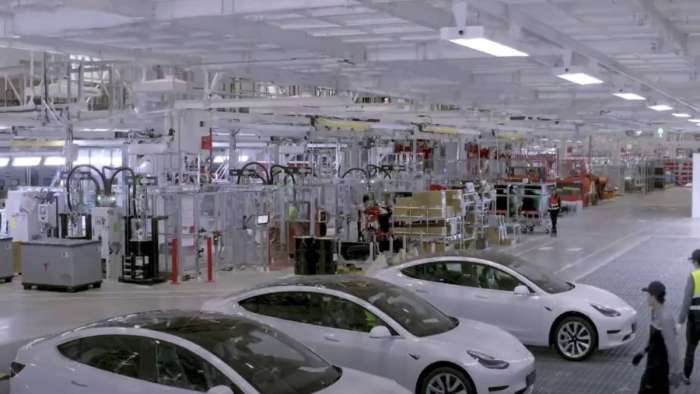 Tesla is experiencing some growing pains for exponential growth, particularly with the Giga Shanghai lockdowns and the supply chain issues and cost of lithium and other raw materials. Let's look at what Tesla Daily has to say about all this.
Advertisement

There is a video of a 9 ton giga press from Idra, which, according to Elon Musk, will be used for the body of the Cybertruck. There is also news from Tesla's VP, Drew Baglino, that there is a lot of growing pains in trying to scale to exponential growth. Let's take a look at this.

Part of the pain is that Giga Shanghai is still not at full production due to lockdown from China in Giga Shanghai, also affecting other businesses in China. If cases stay down, that could lead to some strong productivity from Giga Shanghai.

Reuters also reported that Tesla has weekly output to about 70% of the level before the lockdowns started, according to two people familiar with the matter. Giga Shanghai was reported to hit 2,500 vehicles per week last week. We'll have to wait and see when the May China numbers are released next week.

The 9,000 giga ton press machine from Idra group is being shown now and Elon Musk simply replied on Twitter that this was for the Cybertruck body. There have been 8,000 ton giga press machines being used from Idra, but this machine is even bigger.

There was a 40 minute interview with Tesla VP, Drew Baglino, about the electrification of the automobile and energy. Drew said this:

The Collective psyche is now on board with electrifying everything. There is a lot more to do from a regulatory perspective, but the momentum is there. Battery industry was sort of supplemental "but we're not really there anymore, we need to invest in our own everything" which is an opportune time to reevaluate what you're investing in. We are at that point where the exponential growth curve becomes really painful.

Maintaining growth rates is becoming more difficult for Tesla and the impacts are becoming more apparent to Tesla from any kind of event from Giga Shanghai lock downs, to the rising costs of lithium. Here are other key factors Drew talked about:

* The Fundamental bottleneck is not battery factories, "it really is raw materials"
* The biggest risk area at the moment is lithium
* Maybe sodium can help with that for grid storage
* For battery factory: maybe 2.5 years from beginning permitting process to ramping production
* For lithium mine: last lithium mine in Nevada took 10 years to get permitted

Drew also said it makes sense for there to be a local supply chain for energy storage for every continent. Whether this is solar or batteries, the rest of the world should allow for this.

* One challenge with grid storage is building everything around the battery to last 30 years
* Original Roadster: Pessimistic on how long the batteries would last electrochemically, but overoptimistic on other factors
* Tesla runs the Supercharger network as its own business

* Solar shingles is awesome, it's super easy to build and not expensive at all
* With Solar Roof, spent a lot of time on the shingle and not enough time on the stuff around the shingle
* Focus is now on making the roof job as simple as possible
* Solar Roof commitment? "It'll happen"

More details can be seen from the below video from Tesla Daily:

What do you think about Tesla's challenges with exponential growth? Will Tesla be able to solve these challenges and reach 20 million vehicles per year?