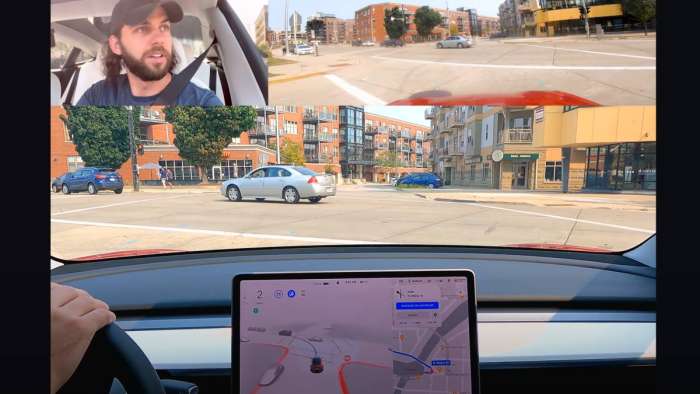 Tesla Releasing FSD Beta to Safety Scores 80 and Above

Tesla is increasing the amount of people able to use FSD Beta with Elon Musk announcing that it will go out to users with a safety score of 80 and above.
Advertisement

Tesla Releasing FSD Beta to Safety Scores 80 and Above

Tesla is increasing its FSD Beta rollout to safety scores of an 80 or above, Elon Musk announced on Twitter. This will greatly increase the number of cars from Tesla running the software.

Tesla FSD Beta is almost 2 years old now and has come a long way since its inception. When it first came out, the screen was more like a 1980's arcade game with basic graphics and lines and boxes to represent cars. But, even then, it would work in situations and drive itself.

Today, Tesla's FSD beta continues to improve and has a graphical overhaul which shows the real world layout around your car, sometimes showing dozens and dozens of cars, pedestrians, dogs, street cones, and even the cars blinkers around you being on or someone getting into their car with an open door.

Tesla's FSD beta getting released to safety scores at an 80 shows a lot of confidence in FSD beta. Why? Because to have a safety score of an 80, you kind of have to be an aggressive driver that isn't following general safety procedures.

In fact, increasing your safety score is a smart thing whether you use FSD beta or not - because Tesla insurance will be available to you, if it isn't already.

Tesla's safety score is very important for safe driving and, if you have Tesla insurance, reducing your monthly premium. At a 97 safety score, my monthly premium for my Model 3 RWD is about 69 dollars. At the start, with a 90 safety score, the premium was about 99 dollars. That's an around 30% discount just for driving a little carefully. Here's how to drive carefully and get a high safety score. FSD beta will also drive this way, especially on chill mode.

If you approach a car in front of you too quickly, or if Tesla's software thinks you will collide with the car in front of you if you don't intervene, you'll get a very loud notification telling you - it will be obvious. It's happened to me a few times, even when I didn't think there was a risk of collision. The Tesla thought there was though.

With Tesla's regenerative braking, and if you pay attention, it should be very rare that you have to use the brakes in your car. Just think ahead a little and when you are needing to get off the freeway, gauge the distance and let your foot off the accelerator. The car will brake for you. There's been a few times I had to hard brake because I didn't expect something in traffic, but it wasn't very often.

Aggressive turning is self explanatory. It means you are turning your steering wheel too much and too hard. Generally, there is no reason to do this unless you are driving aggressively. Otherwise, take it easy on the turns and you should have no problem with this.

For some reason, this one is the most difficult for me, even though I'm always leaving around 5 to 7 car lengths between me and the car in front of me, especially on the freeway. If you maintain a long distance between cars, or always get in freeway lanes with no cars in front of you, you should have a low percent here and a higher safety score. Supposedly this is only calculated at 50 miles per hour or more.

This is where autopilot is forced to disengage. Either you are not paying attention, or you did something that warranted it to disengage. Autopilot is pretty straightforward to use and as long as all the lanes are really clear on the road and you have your hands on the steering wheel, this should never happen.

Tesla's FSD beta software is going out to many more people now and this should help train it even more. Do you think Tesla will do a wide release this year?

Keefe wrote on September 21, 2022 - 12:33pm Permalink
At 70mph, 1 second is about 7 car lengths. Tesla's scoring formula punishes you for dipping below 1 second of following distance, as it considers 1-3 seconds (7-21 car lengths at 70mph) to be the good range. It also indirectly punishes you for giving too much space (over 3 seconds), because time spent at those greater distances isn't used to moderate the effects of your inevitable brief dips below 1s when you bunch up as traffic slows down. The score is based on the ratio (time spent at 0-1s)/(time spent at 1-3s).

Tesla Contemplates A New Strategy for China Retail even As Sales Boom
Jay Leno on Elon Musk & EVs: “I Think He Should Get ... Credit"
END_OF_DOCUMENT_TOKEN_TO_BE_REPLACED