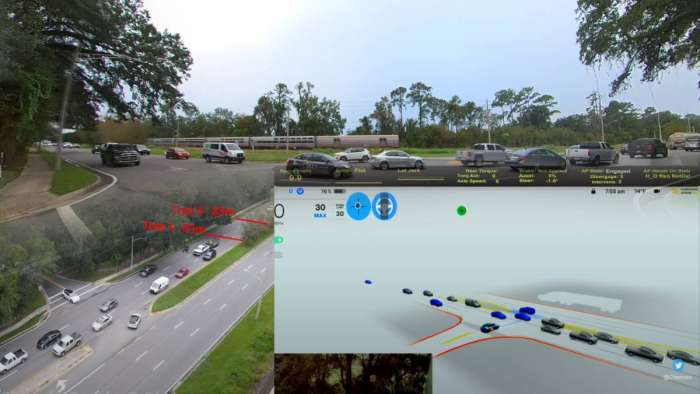 We have a video from Chuck Cook in heavy traffic doing unprotected left hand turns across two sections of three lanes of traffic. This is an incredibly difficult turn, even for a human to do. Let's see what happened:

Chuck's Tesla creeps forward to the creep limit and there are cars coming from the left and right. It waits for some to pass and the car is able to go all the way and into the left lane in the second section of three lanes of traffic.

Chuck's Tesla sees a car ahead turning right, but his Tesla slowly moves forward next to the car turning right, just inches away from it. The car on the right was blocked from seeing its ability to turn right.

The car, after waiting for traffic, then went to the median in the middle and creeped a few more inches to get the back of the car out of the road. This was the first time that Chuck has experienced the car adjusting itself to get out of the road.

This was a busy situation with a car ahead of Chuck's Tesla. The car simply waited for the car ahead to turn right before creeping forward. The car ahead was obstructing the median ahead.

Chuck's Tesla stopped for a car coming on the left and then was able to turn forward through the median into the other lanes of traffic and proceed.

This drive started out with little traffic and the car went to the creep limit. This is the furthest I've seen the car creep forward in all of Chuck's tests. Chuck said he felt a little uncomfortable with how close ahead the car was.

There was an opposing car in the median ahead, which Tesla marked as blue. Traffic was very busy at this point and cars were going around Chuck about a foot or so. With the dense traffic coming together, there was little room to proceed.

The car in the median was turning left into the lane near Chuck and started to proceed. There were other cars, but it went through. Chuck's Tesla did not proceed and instead waiting. It made the right choices in dense and busy traffic.

Eventually a gap was made and the car was able to go all the way through the heavy traffic with multiple human interactions. The only thing Chuck was uncomfortable with was with how far the car creeped forward. It didn't nudge any more after that.

This was a pretty normal drive and the car went forward and into the left lane ahead and drove forward. The car almost paused for another car in the middle lane of the second section of traffic, but it still went through.

On this drive, some cars were coming on the left and the Tesla slowly creeped forward. A car coming toward Chuck was turning to the right, but Chuck's Tesla did not risk it. After that, the car went into the median to wait for oncoming traffic.

There was traffic coming from the left and the car creeped forward and the car waited even with a small gap on the left. Chuck's Tesla continued to wait and be patient. It didn't creep any more than it needed to.

There was a small gap and the car committed forward even with oncoming traffic coming and it squeezed through the median and into the left hand lane ahead to move forward. The car accelerated and was confident moving forward.

All in all, these were all flawless drives on FSD Beta v10.69.2.2. What did you think of these drives from Chuck Cook?

Tesla Contemplates A New Strategy for China Retail even As Sales Boom
Jay Leno on Elon Musk & EVs: “I Think He Should Get ... Credit"
END_OF_DOCUMENT_TOKEN_TO_BE_REPLACED