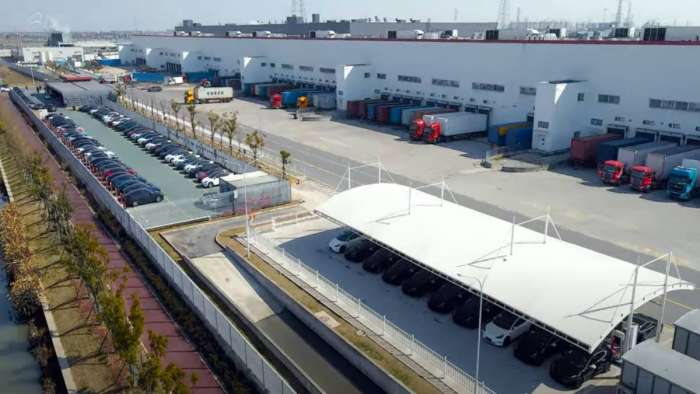 Various sources, including Reuters.com, have stated that Tesla plans to start work on a new factory expansion in Giga Shanghai and that it could be as soon as next month (March, 2022). Why would Tesla do this? To meet the growing demand for its vehicles in China, a country of a large number of people, many who want and can afford Tesla vehicles.
Advertisement

Various sources, including Reuters.com, have stated that Tesla plans to start work on a new factory expansion in Giga Shanghai and that it could be as soon as next month (March, 2022). Why would Tesla do this? To meet the growing demand for its vehicles in China, a country of a large number of people, many who want and can afford Tesla vehicles.

Reuters states that there are two people familiar with the matter that have talked with them. An expansion of the factory for Giga Shanghai would put the yearly run rate at about 2 million vehicles just for China, which is also Tesla's main export hub for Europe (until Giga Berlin comes online and reaches volume production).

The sources familiar with the matter stated that the new factory expansion would be located in the existing area of the production base in Lingang, Pudong. Tesla, as usual, has declined to comment on these rumors. I think it's quite possible they are true because Tesla can only do so much with one factory. And if Tesla figures out a single casting and can create this second factory to handle that and make a more affordable vehicle, Tesla will sell even more. It may not be the Model 2, but it could be a Model 3 RWD, costing less.

Costs and Timetable of Construction

The cost of a new plant would likely be similar to the original Giga Shanghai factory, although Tesla is likely to have learned lessons from building that factory that it would use to break ground and build this new factory. Currently, Giga Shanghai is making Model 3 and Model Y vehicles.

Giga Shanghai will probably produce 1 million vehicles this year and of course, the chip shortage and availability of batteries will play a role in this. Tesla is said to want to have a 22,000 weekly run rate of production in the existing Giga Shanghai factory in the coming months. This gives me confidence that Tesla will reach 1 million vehicles per year from Giga Shanghai and will be able to do the same with an expansion to the factory.

The Shanghai city government has also declined to comment on this matter. Tesla sales have been growing in China due to its Giga Shanghai factory, which is also an important export hub. Earlier in February, 2022, Tesla said that China revenue has double in 2021 to nearly $14 billion from 2020. That is impressive and we're likely to see Tesla continue that trend of growth and development.

Lastly, Troy Teslike, a well known Tesla Twitter analyst, has stated that if Tesla begins the expansion to Giga Shanghai next month, they could start production in June, 2023 if you use the assumption that the expansion would take the same time as the first Giga Shanghai factory. See his Tweet below:

If groundworks at Giga Shanghai-2 start next month as reported here https://t.co/QGn4aziFFo, that factory could start production in June 2023 assuming it takes the same time as Giga Shanghai-1 which was 441 days. pic.twitter.com/svSeS13XkH