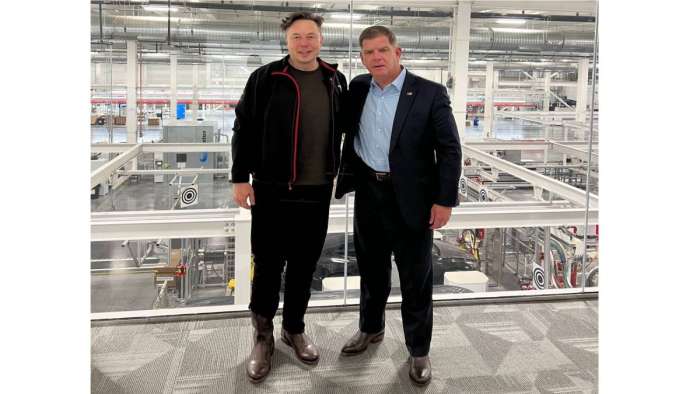 Elon Musk met with Biden's Secretary of Labor, Marty Walsh, at Giga Texas. They spent nearly an hour and a half together discussing a variety of important topics, including inflation, innovation, and jobs. Could this signal a better relationship between Elon Musk, Tesla, and the Biden administration? We'll look into this and more.
Advertisement

This is a picture of Elon Musk with Biden's Secretary of Labor, Marty Walsh, at Giga Texas. Elon Musk ended up giving Marty Walsh a tour of Giga Texas, Tesla's newly built and massive factory in Austin, Texas. This get together appears at least a small attempt by the Biden administration to extend a hand or slight interest in Tesla and what Elon Musk is doing.

According to Axios, Walsh was visiting Austin for the annual South by Southwest festival - which is where he sat down to discuss worker empowerment, how to create more jobs, unions, and the great resignation and how we can get Americans working again.

Walsh spent just over an hour with Elon Musk visiting Giga Texas and during this conversation, there were a variety of topics covered which included inflation, how to innovate, and how to create jobs. Elon Musk and President Joe Biden's administration have not been on very good terms for a while with Elon Musk criticizing Biden and his administration for not recognizing Tesla's leadership in EVs (electric vehicles).

There was even a petition created by the Tesla community on Twitter that tried to get Joe Biden and his administration to mention Tesla as a name in public and to acknowledge Elon Musk and Tesla for their accomplishments. This finally happened when Biden mentioned Tesla during a speech about America, calling Tesla the countries largest EV manufacturer.

This didn't patch up the relationship between Tesla, Elon Musk, and President Biden and his administration though as things still seemed rocky after multiple reports said that Elon Musk did not receive any White House invites because advisors were afraid that Elon would embarrass President Biden.

President Biden did mention Tesla again, a second time, during another speech, even as it seemed he was avoiding saying Tesla again after the first time. There has been a few government officials who are open to starting a dialogue with Elon and Tesla and Marty Walsh is one of them. Walsh shared how he was open to talking with Elon about anything the Tesla CEO wanted to.

Wouldn't it be great if more government officials were as open as Walsh to talking to anyone to learn and share? We might see the U.S. accelerate and become the leader in the world in EVs instead of falling behind. If there are more discussions like this with Tesla and government officials, I think it will help turn the U.S. around as Tesla is by far and away the leading EV company in the U.S. and the world.

Will there be any cooperation between the Biden administration and Elon Musk and Tesla? Will there be more meetings after this?