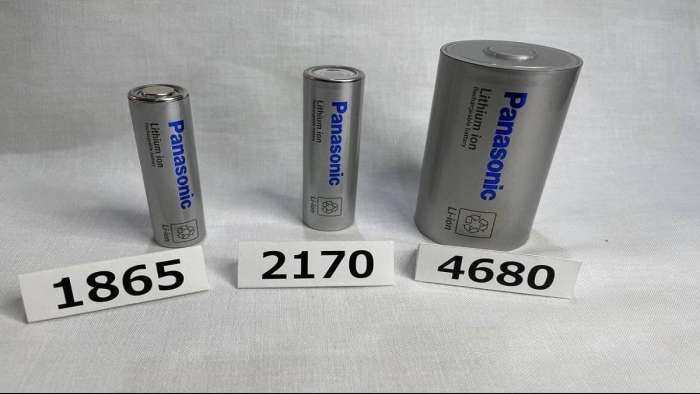 The 1865 in the name means 18mm wide by 65mm tall, thus 1865 is the short name for this battery. I'd rather see the name be 18-65 so it was easy to determine what the dimensions are for someone new, but 1865 is easier and that is what is the commonly understood term.

These batteries are lithium-ion batteries. If you go by what Elon Musk has said in the past, then the vast majority of smaller and less expensive vehicles will not be using these batteries because you cannot charge to 100% and get a good long life out of the battery.

These types of batteries have a variety of applications including power tools, electric vehicles, laptops, etc... Tesla uses these batteries in its Model S and Model X vehicles.

Did you know that these batteries, which were commonly used in laptops, were what Tesla used when it was just getting started. It makes sense to do that back then, in 2010. You needed a battery that could be acquired in large quantities and that was already proven to be working and at the time, this battery was it.

These batteries are similar to other lithium-ion cells and used for powering devices like flashlights and vapes.

These batteries are typically used for the Model 3 and Model Y vehicles for Tesla.

This is the latest battery cell being manufactured and is quite larger than these last two mentioned batteries, being 46mm wide and 80mm tall. Panasonic recently unveiled its new 4680 battery cell for Tesla and it is believed that the CyberTruck, new Model Y from Giga Austin, TX, and the upcoming "Model 2" will use these.

The 4680 batteries could be cheaper, more efficient, and have more range than the other battery types. If this is true, Tesla should be able to have less batteries for the same amount of range, which will eventually reduce the cost of Tesla vehicles.

Of course, at the time of this article, Tesla vehicles are in such high demand, that it won't likely matter how much Tesla reduces costs until the demand cools down a little.

We'll see these 4680 batteries from Panasonic likely being tested sometime in early 2022 according to numerous sources like electrek.co.

Tesla also is starting to use LFP (lithium-iron-phosphate) batteries in its base version of its vehicles in order to allow for charging to 100% and a longer battery life. They use a prismatic form factor and I've yet to see someone say what the dimensions of these batteries are.

What other types of batteries will Tesla and other battery manufacturers produce? Could we see a 96180 battery? Will someone find a way to make a 1130 battery that is small but has a great density for charge and power? Or will we see the battery form factors continue to increase? These are questions for those who really know batteries well to answer.