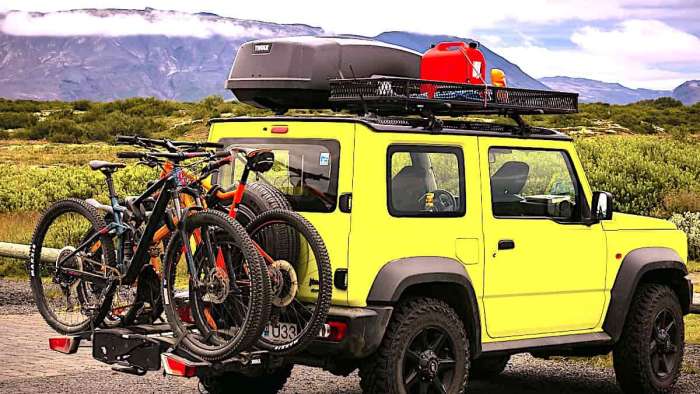 Did you know that bicycle racks can lower your vehicle’s miles per gallon by as much as twenty-eight percent?! That’s nothing to scoff at for cycling enthusiasts who plan to take their favorite bikes with them during a summer road trip. Here’s what Consumer Reports analysts found on vehicle types and bike rack types that are the most and the least affected from aerodynamic drag while traveling with your bicycles attached to your car. Plus, a YouTube review on the best bike racks for SUVs and cars.
Advertisement

Oddly enough, it is cheaper to rent a bicycle while on a summer trip than it is to haul your bike wherever you go during a summer road trip. True, it might be a little inconvenient; however, according to Consumer Reports analysts, hauling a bicycle on your car can lower your gas economy by as much as 28%!

In a comparison study pitting a 2019 Nissan Altima sedan and a 2019 Toyota RAV4 small SUV going 65 mph outfitted with both a roof rack and a bike hitch separately, the analysts found that aerodynamic drag and the added weight of the racks and bikes does affect your vehicle’s gas mileage.

However, some vehicle types and bike rack types combinations fared significantly better in the comparison study.

Essentially, what was determined is that:

The analysts concluded that overall:

For the sedan, our tests revealed that the fuel economy took a significant hit with a loaded bike rack (much more than the SUV’s)—and even the empty roof rack exacted a large fuel-economy penalty. Only the empty hitch rack had a negligible impact.

The RAV4 SUV, on the other hand, was less affected by either rack type, but the hitch was still the clear winner.

Based on their findings, the analysts also noterd that for the maximum in fuel economy, consumers will also do better with a hitch rack because it is easier to remove, and thereby will result in drivers being more inclined to take their bike racks off their car when not needed resulting in saved fuel.

Now that you know which vehicle type and bike rack type provides the best gas economy, here’s an informative YouTube video that reviews the best bike rack for your SUV or car.

For more about fuel economy and cars designed to minimize aerodynamic drag, here is how Tesla did in a race against some popular EVs, plus why this car could be significantly surpassing Tesla Models in both distance and charging.

COMING UP NEXT: Should you spend more on a oil change with synthetic engine oil?