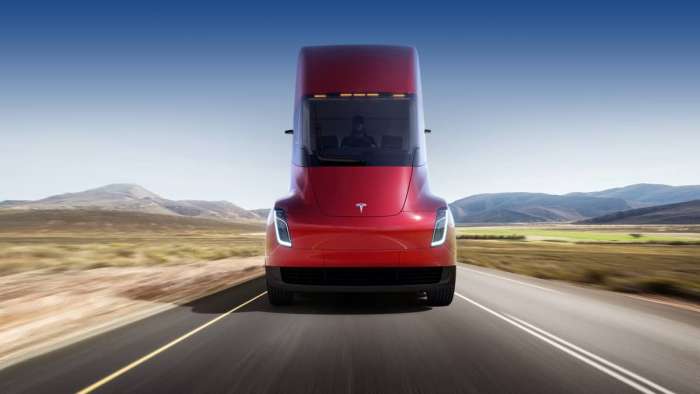 The start of production for the Tesla Semi has been pushed back again to sometime in 2022. It appears that Tesla wants to focus its energies on expanding output at the Berlin and Austin Gigafactories.
Advertisement

Just a few days ago, it appeared that Tesla was about to start production on the Semi. Much of the public has looked at the Semi with a sense of awe over the past few years. After all, there aren’t any other electric trucks out there with one driver’s seat in the middle. There aren’t even any other Electric semi-trucks that are even talked about much. The bottom line is production has been pushed back and time will tell whether Tesla made the right decision.

Why Production of the Tesla Semi was pushed back

Production was pushed back because there is a battery cell shortage and a chip shortage. Both of these have been nagging issues for Tesla in the past few months. However, it seems that Tesla has ran into some roadblocks that led to the decision to put the Semi on the shelf once more.

Tesla also wants to focus on the Berlin and Austin Gigafactories. A new Model Y is expected to come out. The official status of the Cybertruck is unknown at this time.

It’s possible Tesla should have done something different

Tesla may have made the right decision to delay the Semi. The truck could come out in 2022, and there would still be excitement around it. There is another possible scenario, and this is a bleaker one. Production was postponed until 2022 due to supply chain breakdowns. These supply chain breakdowns will likely still be an issue going into 2022. In fact, prices of goods are expected to continue to skyrocket. Tesla is also working on factories in Berlin and Austin while trying to get its operation off the ground in India.

Something Tesla could have done was to start production on the Semi, but to produce a limited number of them. This would at least get the ball rolling so that the resources are in place. This might be a better scenario but producing even a limited number of Semis could also be a costly financial move. Even earlier on this year, the constant delays were making some wonder if the Semi would ever be released.

Something else that could happen is the delay of Semi's production could end up working in Tesla’s favor. If the supply chain situation improves, then Tesla could begin building Semis in 2022. Tesla would be in a more advantageous position because it could incorporate some of its latest software and could really go all out when it comes to making the Semi the best big rig it could be. The good news is that companies will have a place for this truck on their fleet because of the massive amount of money they will save on fuel.

DeanMcManis wrote on July 26, 2021 - 11:03pm Permalink
Unfortunately, it probably has a lot to do with troubles in scaling up the mass production of Tesla's 4680 batteries, which was really what killed off the Model S Plaid+. The next generation Model Ys, coming from Germany and Texas will use the 4680s, as well as the Cybertrucks. Each of those models constitute high visibility and high volume sales, with a lot of EV and gas powered competition threatening to steal profits. I suspect that even though Tesla may have postponed the Semi's release, they will probably start building them later this year anyway, just in limited numbers.