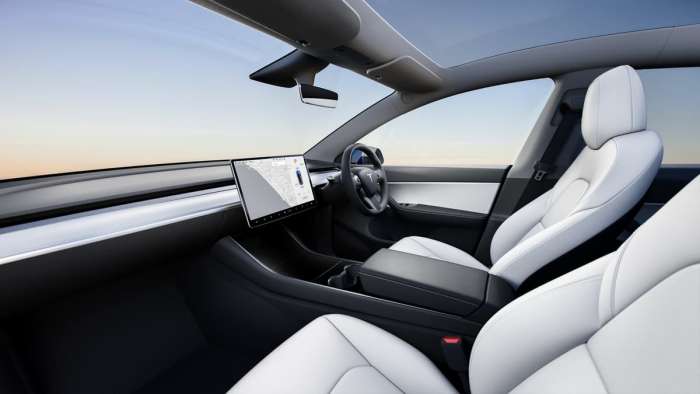 There is now proof that eliminating radar was the right thing to do for Tesla. Tesla took the dreaded training wheels off and they are now able to let loose. A future without radar appears to be a very promising one.
Advertisement

It is relatively old news that Tesla has decided to axe radar and rely on cameras exclusively for their self-driving software. The important point here is that the sky is the limit now because Tesla isn’t relying on radar. In the future, this will be seen as one of the best decisions Tesla ever made. Tesla did not just eliminate radar, but they have also improved other aspects of cars such as the Model Y so that all the pieces fit together. These aspects include objects like the windshield wipers which have been moved over to the side of the windshield so they would work more effectively

Some still think radar could be useful

There was one video posted on Youtube about a week ago where a driver voices their concerns about a Tesla without radar. This driver says that radar is useful because it allows the Tesla to see two cars in front. This is an important question that was raised, and part of this switch to Vision means that car companies and drivers alike will have to start thinking of AI differently instead of just as a substitute for a human driver. The AI does see further in front but was only showing one car on the screen. Another complaint some drivers had is that the auto high beams must be turned on to even use autopilot. These high beams have been said to help the cameras see further in front.

Contrary to what some have said, the self-driving systems operate with more precision in Tesla cars without radar. The reason why Tesla has now unlocked their full potential is that the cameras eliminate many hiccups. In previous critiques of autopilot, it has been said that the car was too timid and often wasn't positioned correctly on the road.

Tesla is getting out of their comfort zone

This switch to Vision shows that Tesla is getting out of their comfort zone. The costs could be enormous for Tesla if they release new software that makes major errors. However, using only cameras allows Tesla to make cars that drive more fluid. This could be seen as a negative that the car is acting less cautious, but so far it has been shown to be a positive. There have reportedly been many testimonies that stated that the new Model Y with no radar drives noticeably different than the previous generation vehicle that is equipped with radar.

Why a future without radar is so promising
In a previous article, it was hinted that Tesla Vision was going to alter the way the vehicle drives for the better. This seems to have come true. The best part is that cameras don’t seem to have very strict limits as to how quickly they can react to their surroundings. Radar seems to have limits as to how fast it can operate. The AI is set loose with cameras, which is why radar can be compared to training wheels.

Thomas Montague wrote on June 7, 2021 - 1:38am Permalink
Why doesn't this article mention LIDAR? Is the author ignorant of the importance some place on LIDAR for safe self-driving? Dropping RADAR when you never had LIDAR does kinda make sense. But not having LIDAR is a cost savings advantage that leaves Teslas missing a major piece of equipment that no, does not encumber the AI, nor does it make the car drive more or less "fluidly". LIDAR allows for a very accurate 3-dimensional map to be created in real time for the AI to utilize. Apparently from what I read, Teslas need AI just to create the accurate map. I hope that doesn't distract from the other important task the AI has - piloting the car safely to its destination. Obviously Tesla took a huge gamble that the cars would be safe enough without it. But that remains to be seen. There's still a lot of work to be done to establish that autonomous vehicles _with_ LIDAR are as safe as we want them to be. So how can the author be so sure they don't need either *DAR? He can't. No real evidence is presented, just vague phrasing like "There have reportedly been many testimonies", "eliminate many hiccups", "it has been said". This type of phrasing has long been used to raise an issue in the readers mind without having to take the real legal responsibility of actually asserting anything. And then moving on as if the case is therefore closed. All of this is designed to intentionally deceiving the reader into the impression that things "fit better" without RADAR. This article is intellectually dishonest, even if it is legally without risk to the publisher. It is propaganda to support TSLA share price in the face of actual facts. This article is so egregiously misleading, it diminishes the credibility of the entire publisher.
Michael McCartney wrote on July 10, 2021 - 6:04pm Permalink
Completely agree with the above comments by Thomas Montague. Time will tell if Tesla bet on the wrong horse by strictly relying on Cameras over Lidar in conjunction with cameras.
Jeff wrote on September 8, 2021 - 7:38pm Permalink
Author is high as a kite. Smoother? NO, the car now jerks to a stop, doesn't work when it rains, and is miserable to drive. Safer? NO, the car now reacts to vehicles off the road like they were stropped in the middle of the road. this is more dangerous as it puts driver and others in precarious situations. Fix this stuff Tesla.