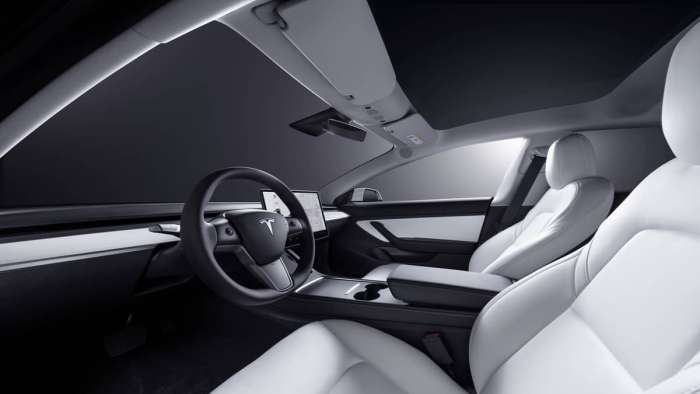 Tesla’s new wave sensor has finally been approved by the FCC. This wave sensor is a game changer for Tesla as it will help them build up their driver monitoring system.
Advertisement

Tesla’s cars are already filled with sensors, and many of them serve useful functions. For example, Tesla was able to get approval for a short-range motion sensor that could alert the owner of the car if they left their child in the rear seat. This is a tool that can help save kids from overheating or even dying in hot cars. Many new cars have this feature though. Tesla also has designed a safer airbag deployment system by putting sensors into the seats. The sensors in these airbags can profile the occupants in the seats and try to figure out their height and weight.

A wave sensor is a type of microelectromechanical system. It relies on using waves to sense physical characteristics such as the range and velocity of an object. Wave sensors have been used to sense ocean waves, but they serve many purposes outside of that. When applying this to Tesla, the wave sensors sense the motions of the occupants inside the car just like other types of wave sensors can sense ocean waves and sound waves.

Tesla’s plan with the wave sensor

Tesla’s plan is to use these wave sensors to help monitor drivers and make sure they are alert. This has become more important after it has been found that most of the accidents that receive news coverage are a result of driver carelessness (to some degree). The wave sensor is likely going to become an integral part of Tesla’s self-driving system.

New video has been released

Some new video has been released of this wave sensor. A 23 minute video on youtube shows what the sensor actually tracks. A shorter snippet of this video has been posted on Twitter. The system appears to track a lot of important details. It even tracks phone use. It would be nice if a car would just stop if the driver was looking down at their phone. It would save an enormous number of lives every year. The sensor also tracks the driver’s head and eye position. The sensor can track if the driver’s eyes close. It also can sense sunglasses. The driver in this video was wearing a mask, so it would be interesting to see if that is able to change what the sensor interprets.

This sensor will be very useful for autonomous vehicles. The AVs could know how many people are in the car. If there are too many passengers in the car, the car would not move. Most cars already have seatbelt sensors, but the car could decide not to move if the passengers aren’t buckled in.

Potential pitfalls of these sensors

These sensors could come with a number of issues. No technology is perfect, but the system could easily have errors because it can only be so precise. If a driver blinks for too long it could see the driver as being asleep. If a driver’s gaze goes a little too far off, it could stop the car. Safety is important but so is usability. These systems should improve the driving experience, and not make it more tedious. Many driver assistance systems up to this point have made driving safer, but there are many drivers who disable these features on their car. Some drivers will sometimes drift out of their lane but will turn off lane-keep-assist because they don’t always want the steering wheel to shake or to correct them. The same issues could come up with a sensor system that is becoming more and more sophisticated.

DeanMcManis wrote on April 26, 2021 - 2:05am Permalink
It is smart that Tesla is focusing on the capabilities and uses of the sensor instead of the specific technology. I worked with low power millimeter wave sensors for security systems. They have some limitations (like optical systems) needing line-of-site view. But they do have the advantage mentioned that they can "see" a child under a blanket inside a car. I suspect that Tesla is announcing that they have redundant internal sensors so that people are less focused on the internal cabin cameras, and worrying about related privacy issues. I do not think that the mm-wave sensor is doing any of the face/eye tracking. That's the camera. Low power mm-wave sensors are good at roughly tracking of water, bodies, and metal, but they are not great with high resolution processing like optical cameras are. Plus mm-wave sensors would also help with security and safety issues in future RoboTaxis.