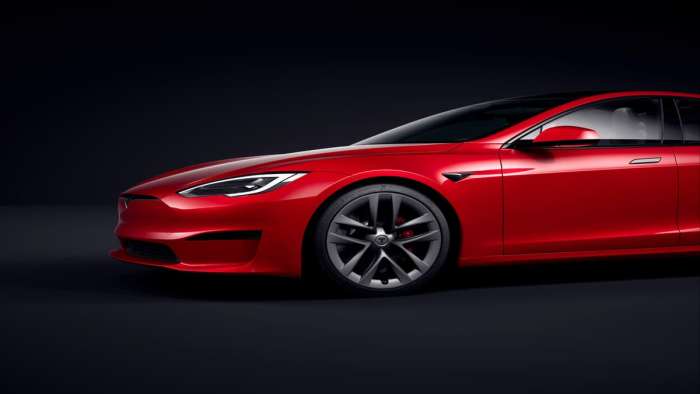 The Model S Plaid delivery event showcased this particular vehicle’s record-breaking statistics. This event gave some indication as to what the future of the Model S could look like.
Advertisement

The delivery event for the Model S Plaid was well received by many. The crowd at the event was enthusiastic. The intro was inspiring and showed some previous accomplishments of the Model S. The rest of the event consisted of Elon Musk just talking. From hearing that description, it may seem like there was something left to be desired, but Musk was rattling off one revolutionary feature after another. The Model S has earned many accolades since Tesla released it. Over the past year, Model S sales numbers took a deep dive. Some of this was due to the fact the car was about to be redesigned. The other reason for the dip in the number of Model S vehicles sold had to do with the rising popularity of the Model 3 and Model Y.

The Model S has struggled to sell recently, and this event was a good way to try to get buyers thinking about the Model S again.

A rising tide lifts all ships

This particular event was for the Model S Plaid. The Plaid is an extremely capable EV with 1,020 horsepower. Since this car is getting lots of press, it will likely end up helping the Tesla brand even if they don’t sell that many units. The buzz behind the Plaid could help lure potential buyers into the showroom to look at buying the cheaper Long Range Model S, or another Tesla model. This is similar to the phenomenon of the Dodge Hellcat. A Hellcat has over 700 horsepower and is either too expensive or impractical for many buyers. However, videos of the Hellcat doing burn outs and speeding around the track helped get buyers interested in other Dodge models.

The event started off well as Elon Musk drove a black Model S Plaid onto the stage. He then got out of the vehicle and went right into giving a speech. Musk started off with a profound statement which talks about his motivations for even wanting to make a car like the Model S Plaid. Musk said that he wanted to show that Electric cars were the best kind of car. People will have their own opinions on that, but Musk's motivations are clear. He wants to continue to show that Electric cars can be much faster than a golf cart and also have the most advanced technology.

Musk talks about the Plaid’s best stats such as the car being able to go 0-60mph in 1.99 seconds, and max out at 200mph. It is also impressive that this vehicle has the lowest drag coefficient of all time, and it is a 4-door sedan.

The best features were addressed

Musk makes the case for EV’s and particularly the new Model S Plaid by unveiling a new HVAC system. He said that this HVAC system greatly improves the vehicle’s stamina on the track. Some cars can overheat if they are run ragged at the track. Another thing to note is that the Model S requires so little driver involvement. Tesla had made us aware that they wanted to do away with traditional stalks and gear levers. However, Tesla made it clear that the car was capable of doing almost everything. One of the only things the driver must do is walk up and the car will help them open the door, and then will start itself. It can be assumed that the driver still has to pay attention and hold the wheel every 10 seconds or so on autopilot. The sound system can also be updated every so often.

Conclusion of the event

The event was concluded when Musk said that the first 25 Model S Plaid vehicles will now be delivered. This helped send the message that Tesla is ready to roll out the New Model S Plaid.

Future of the Model S

The future of the Model S is still somewhat uncertain, but this event showed what Tesla is truly capable of. Features that are present in the Model S Plaid could soon be prevalent throughout Tesla’s entire fleet.