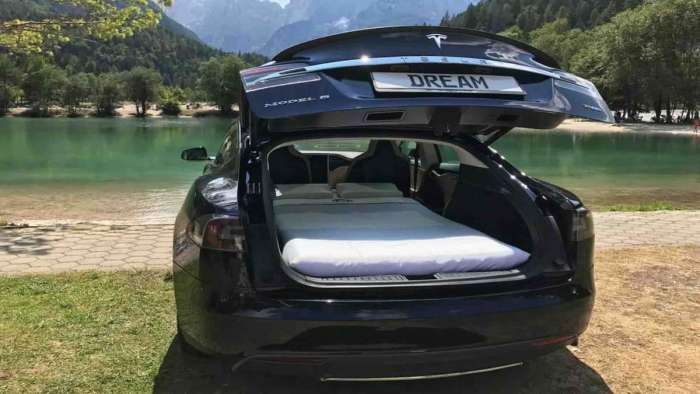 Cybertruck Camper Conversion Is First of Its Kind

A new camper conversion has already been made for the Cybertruck. It is an electric high-tech camper that compliments the existing capabilities of the Cybertruck.
Advertisement

Past car campers and tents

There have been a number of cars over the years that are known to be capable of supporting a camper conversion. One of the most infamous cars to sport a tent package is the Pontiac Aztek. The Aztek is a car is on many lists which rank the ugliest cars ever made. The Aztek may have not been the most visually appealing car, but it had a slanted roof in the back of the car, which helped with fitting a tent over the trunk of the car. The Cybertruck also has a slanted roof in back which is much lower and longer than the roof. Many pickup trucks are also able to be fitted with a tent, but the Cybertruck’s camping package is much more than a tent.

The Cybertruck camper is an actual camper. It has been named the Cyberlandr. It is not a fitted tent like on cars like the Pontiac Aztek. It has real windows with tinted glass. The camper has many amenities such as a sink and toilet. This structure can be fitted on the back of a Cybertruck, and it is adjustable. The adjustability of the Cyberlandr can be seen in this video below.
https://www.youtube.com/watch?v=eipgk-8TJt0

The Cyberlandr has many conveniences you’d probably find in your own home. There is a fridge, a sink, and a stove. This is a small space, so the Cyberlandr has a lot packed into that space. For example, there are two lounge chairs that can be reconfigured into a bed. The versatility of the Cybertruck and the now the Cyberlandr speak volumes in that way. This Cyberlandr add-on will be a great asset to people who work remotely. The pivoting tables are a good place to work on a laptop before hitting the hiking trail. Wi-fi in the Cyberlandr can be accessed via Starlink. The truck also comes with a 32in TV monitor that can be mounted on the window above the counter. This is all powered by solar panels which can be placed on the roof.

The best quirks of the Cyberlandr

The camper disappears completely into the pickup bed when not in use. The water supply in the bathroom recirculates and comes with a filter. This camper is also exceptionally light with a weight of only 1,200 pounds. This is a great alternative to a traditional fifth wheel that the truck would tow. A travel trailer would impact the range of the Cybertruck. The camper also fits neatly inside the Cybertruck. This is important because it gives it a very clean appearance.

The pitfalls of this camper

The good news is that the Cyberlandr represents a good innovation that is filling a void in the marketplace. There is one unknown, and that is the fact Tesla doesn’t know what the true dimensions are going to be for the Cybertruck. This means that this camper idea might have to go back to the drawing board. This camper also is quite expensive as it would be an almost $40,000 add-on. It might be well worth the money given some of the features it has.

LG's New EV Battery Plant Is a Welcome News for Tesla
Tesla Giga Berlin's New Hurdle: It's Not Only the Gov't, but Now Tesla Itself
END_OF_DOCUMENT_TOKEN_TO_BE_REPLACED