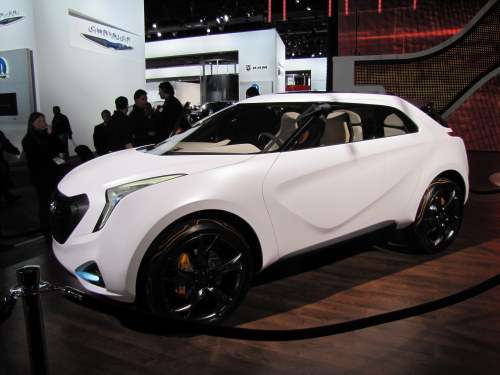 Concept cars have traditionally been far-out sculptures, exercises in futuristic thinking at the Detroit Auto Show, complete with radical interiors. This year, the spectrum has been expanded to include the tuner look, but with radical paint accents over sculpture.
Advertisement

While the Hyundai CURB (shown) is more the sculpture concept form, the Chevrolet Sonic Z-Spec Concept is one example of the tuner approach to customization.

According to the official GM release, the standard Sonic sedan and five-door models convey strength, stability and refinement, a wide, planted stance, with wheels-at-the-corners proportions, conveys performance. The Z-Spec concept represents a smart looking tuner version of that family of factory-engineered accessories and the best of the aftermarket under a single design theme.

Using existing but progressive, raked body lines that suggest movement even when the car is stationary, aggressive cues are defined by existing fender flares and motorcycle-inspired round headlamps, blended with global design cues – a dual-element grille and round tail lamps – for a design instantly recognizable as Chevrolet.

The leading edge of the basic sculpture of the hood forms a character line above the headlamps, which flows in a sleek side profile characterized by uninterrupted body side lines, a high beltline and low roofline. The side mirrors carry the same shape as the car and seemingly disappear into the profile.

The tuner look keeps the sculpture intact to a great degree. Point is, they’re still sculpturally connected except for paint and accents.

Details that reinforce the standard Sonic’s quality and attention to detail include chrome grille surrounds and matte black honeycomb grille inserts on all models, while a range of large wheel sizes, including 17-inch alloy wheels, reinforces its sporty demeanor.

The Sonic Z-Spec, though, grabs your attention more even more with color coordination and accent, like the red-toned wheels and the red trim around the grill, while the sculpture is still there.

The Subaru Impreza Concept leans toward the future look rather than customizing an existing design. Still, it is based on a rational vehicle sculpture.

Probably the most radical of concepts using paint rather than sculpture is the Scion, complete with octopus tentacles and rivets like a submarine. The sculpture is intact almost 100%. It’s all done with paint, though.

Is that a change in customization? Is that the message that industrial designers really want to convey?

Hyundai, on the other hand, has taken the rational concept car approach with their CURB; meaning radical sculpture over paint and tuner details. It is truly a work of industrial design, an exercise in future vision as opposed to a tuning look. One may question the use of flat white for the exterior, but the sculpture is strong enough to stand on its own. And that interior is just wild!