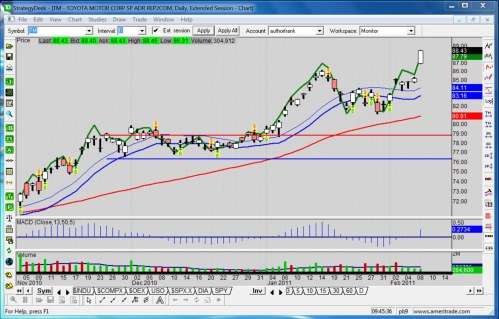 15 minutes after the open in New York, the pre-market bullish tone was intact.

Since there is usually a cause for every effect, most notable time was TMC’s revision to its consolidated vehicle sales projections for the full fiscal year ending March 31, 2011. The number rose from 7.41 million to 7.48 million units, an increase of 70 thousand units from TMC’s forecast announced in November 2010.

According to the official TMC news release, on a consolidated basis, net revenues for the nine-month period totaled 14.351 trillion yen, an increase of 5.0 percent compared to the same period last fiscal year.

Commenting on the forecasts for FY2011, TMC Senior Managing Director Takahiko Ijichi said: “In addition to an improving vehicle-sales outlook in Japan, Asia and Russia, the progress of our company-wide profit improvement activities, such as further reduction of variable costs and control over fixed costs, has exceeded our earlier expectations. As a result, we now expect to overcome the rapid and acute yen appreciation and achieve a substantial increase in operating income. One can therefore see that our earnings are firmly recovering.”

From a chart perspective, TMC has shown support in the form of a double bottom in the 81.50 area.