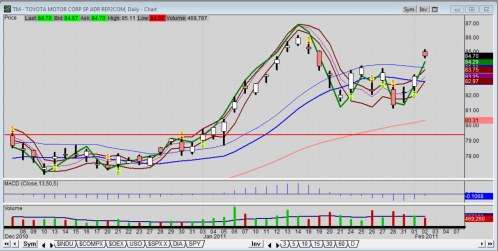 Note the gap at the open from Tuesday's close, as traders, like Toyota's customers, are once again voting with their money.

Toyota (NYSE: TM) said January sales rose 17.3%, led by truck sales. And trucks are the heart of the Big-3 profits.

From a stock fundamentals perspective, Toyota still has a lot of cash, despite the legal issues with litigation for accelerator claims. Furthermore, Toyota enjoyed plenty of notoriety with its Prius Hybrid, just in time for the 2011 Detroit Auto Show.

At the same time, 2011 NAIAS showed Toyota wanting to do more, like extending marketability of Prius technology, and by expanding the vehicle’s length with the V and showing a sportier C concept. From a stock investor’s paradigm, this is indeed the expansion of the platform’s marketability, a strong fundamental picture from which to buy any stock.

From the daily chart perspective, technical analysis shows a gap on today’s open from yesterday’s close. Traders believe price gaps often get filled, but the mere presence of a price gap incites buyers to buy any price dips. Point is, it implies a bullish trend bias for Toyota stock, when Ford (NYSE: F) and General Motors (NYSE: GM) are languishing from their upward move in January.

Toyota stock is also trading above the 50-day moving average, the telltale sign that the trend bias is bullish, despie occasional minor sell-offs that all stocks experience.

In parallel, though, the Honda (HMC) stock chart shows its bullish trend bias is also intact.