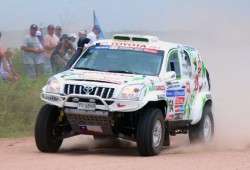 Out of the 55 finishers from a field of 156 starting vehicles, CNG powered race cars placed 25th, 29th and 48th for the extreme 2011 Dakar rally.
Advertisement

The collaboration demonstrated the effectiveness of compressed natural gas (CNG) at the 2011 Dakar Rally.

Gasco entered three vehicles converted to operate on compressed natural gas (CNG) in the 2011 Dakar Rally. They were the only vehicles entered in the T-1 category, for alternative fuelled vehicles.

Considered the greenest team of the Dakar Rally, even the Chilean president Sebastián Piñera talked about the particular benefits of this fuel, and enjoyed a drive of one of three Toyotas.

As reported by Motorsport at the end of Stage 9, the team manager, Jose Miguel Mello, acknowledged the importance of the Dakar in this ambitious venture.

He said, “Good results in such a difficult event are the proof that this fuel source can play a role in day-to-day life. There are already 10 to 12 million vehicles running on this type of fuel in the world. For us, the idea is to develop its use in taxis and vans in Chile and Argentina, based on the performances of our three cars.”

For the record, starting January 1st, the rally ran for 16 days and more than 9500 kilometers long, including 5,000 kilometers of racing, spread over 13 stages.