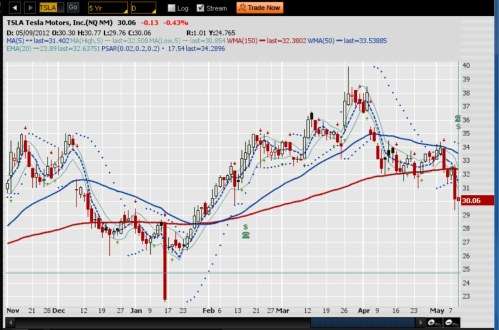 After earnings and forward-looking statements were announced, post-market trading might be an indication that investors in Tesla Motors (Nasdaq: TSLA) stock are focusing more on the upcoming Model S production.
Advertisement

Nobody except the most impatient expected a profit so soon for Tesla stock, so investors were not surprised by another quarterly loss. Rather they just hoped it would be a rational and controlled loss, which it appears to be.

Truth is, news of any loss in earnings can only be soothed by forward-looking statements. It either propels or kills an uptrend; but Tesla stock might return another impulse bull wave with good reason. The bull wave that started in September, 2011 had slightly derailed the stock these past few months by news of two key personnel leaving the company among other unimportant news. Then again, the general market hasn’t been on fire either. Nonetheless, that was then; and this is now.

According to a live CNBC report by Phil LeBeau, Tesla has confirmed via today’s conference call that the driving range for the new Model S sedan will indeed be above 300 miles.

That is a major win for the company, not to mention the entire EV industry. Furthermore, Tesla's conference call revealed it has over 10,000 orders with the car priced at $57,400.

Albeit the cost of the Model S will still be out of the range of most drivers, 300 miles in driving range is likely what’s driving the stock higher in after hours. Furthermore, the very idea that production is starting in June, one month ahead of schedule, is another significant win.

It was not that long ago that one of the major problems with Tesla stock performance was the unrealistic expectations of traders. Many wanted to treat Tesla as if it was a mature company like GM or Ford. Traders would drive up prices in an impulse wave, then sell off to take profits; only to pick up the stock again for another wave upward. As of late, though, the price action had been down; but that might change very soon.

Fact is, Tesla was not mature, and will not be mature for some time. So, it takes forward-looking statements and faith to buy with both hands. This production of the Model S announcement, though, says the child has at least become a strong teenager, with eagerness and vision that only youth and a leader like Elon Musk can provide.

Granted, the engineering achievements have made the company appear from time to tome more mature than what it is. Nonetheless, traders and investors alike must stay focused on important statements contained within the quarterly reports as well as the earnings and conference calls. Fact is, Tesla is no longer a startup vision; it’s for real with a real product that will soon be produced in higher volumes than its roadster predecessor.

The Model S sedan is indeed a beautiful car; albeit out of my budget range. Still, from what I experienced at the 2012 NAIAS in Detroit, it has features that were surprising, above and beyond the aluminum structure and electric drive. Within the tech-oriented video, witness those two reverse-mounted, third-row seats as well as the interior and exterior. Also note the video screen on the dash, the biggest of any I have ever seen.

In a letter to shareholders a few months back, Tesla noted the Model S development and testing remained on schedule so as to commence deliveries by July of this year. As a forward-looking statement, that was a positive. The fact today’s conference call relates the Model S will be produced early as in June says one thing very important in the investing world - Tesla reporting is honest and its forward-looking statements can be counted upon to deliver.

Later, the company revealed their new Model X crossover, a unique blend of a minivan, SUV and sports car based upon the Model S platform. That too was considered forward looking, but with a greater sense of physical reality. The response at the time from customers was considered overwhelming, as one day after the reveal, the company had received over 500 reservation requests.; and that order growth is continuing.

Tesla also announced the start of a development program with Daimler for a new Mercedes-Benz vehicle with a full Tesla powertrain. This represents an increase in the scope and scale of their deepening relationship with Daimler. Again, another positive.

Those were not the only news of the past that have credence. Now the Toyota RAV 4 EV will have a Tesla signature on it; as Tesla developed the battery pack and power control electronics. This proves Tesla is clearly a viable tier-one supplier of electric drivetrains. Unlike the relatively long ranges Tesla vehicles have been able to boast, the RAV4 EV will only go about 100 miles on a full charge, according to Toyota; but that is in keeping with the range of the Nissan Leaf and upcoming Ford Focus EV.

Tesla Motors, Inc. (Nasdaq:TSLA) stock had been in a bull wave since its spike low on Jan. 13, then peaked in March. Also per the daily stock chart, the 50-period weighted moving average is still above the 150-day weighted moving average, but it is converging; which reflects the recent sell off of the general market.

So, where to from here? We’ll have to watch the price dynamics after tomorrow’s opening bell. Nonetheless, this kind of positive affirmation by the after-market crowd does imply the probability is more on the side of bullishness than bearishness for Tesla stock.